Whether native or imported, the Traditional Art Apprenticeship program helps communities preserve their own cultural heritage by providing an opportunity for master traditional artists to pass on their skills to a qualified apprentice. Traditional arts reflect a community's shared way of life. Many of these practices are rooted in a longstanding sense of place, community and cultural identity. More than just lessons, Master traditional artists seek to share this understanding of their culture with their apprentices. Such an exchange is usually learned in an informal, "give and take" way, through example or imitation rather than formal academic training. The Traditional Arts Masters for 2011 are: 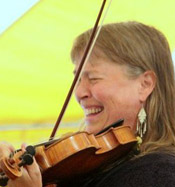 Maine’s unique legacy of fiddle music is a blend of styles from England, Ireland, the Maritimes and French Canada. Traditionally passed down in such community settings as dances and family get togethers, it is best acquired by ear. Ellen Gawler, this year’s master fiddler will be doing just that when she teaches calling and fiddling for contra dances to her apprentices Camdyn and Marissa Heikkinen. A long time fiddler and caller for contra dances throughout New England, Gawler learned the art of fiddling and calling from master old time fiddlers as Alfred Omar and Lucien Mathieu.
Cindy Larock, Franco step dancer (Lewiston) Emma Jacques, apprentice 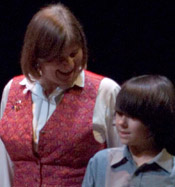 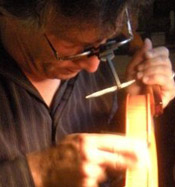 Harry Richter can be found at Somerset Violin building, repairing and restoring violins; many of his regular customers play in orchestras throughout Maine. Richter came to violin making later in life and studied with Karl Roy in Mittenwald, Bavaria, Germany as well at the Violin Craftsmanship Institute in New Hampshire where he learned violinmaking, violin repair, bow repair and rehairing. In 1994, Richter opened his first shop in Waterville, Maine. As a first year Master artist in the Traditional Arts Apprenticeship program, Harry Richter will be sharing his skills with apprentice Nate Rudy.
Brian Theriault, snowshoe maker (Fort Kent) Glenn Labbe, apprentice 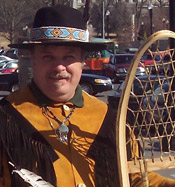 Continuing a Native American tradition that began centuries ago, Brian Theriault has been making one-of-a-kind snowshoes for over 35 years. As a young man, his father, Edmond Theriault taught him how to both make and repair snowshoes. Brian Theriault continues the family tradition of this endangered art. Based in Fort Kent, Theriault specializes in hand made, custom designed snowshoes perfect for exploring the snowy northern woods. As a master artist, Brian has taught several apprentices including his current apprentice, Glenn Labbe of Fort Kent.