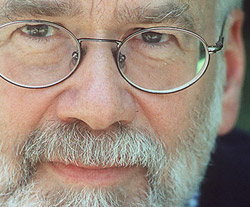 To bring poetry to the people of Maine, Wesley McNair, assisted by the Maine Writers and Publishers Alliance, will undertake two initiatives during the initial year of his five-year term. The first project, beginning this fall, will be a series of readings called “The Maine Poetry Express,” a “train” that begins in our northernmost town of Fort Kent, and makes it way south by way of “stops” that feature group readings given by poets in all the regions of Maine, including what are called “underserved areas,” from north to south and from east to west. The public will be able to purchase broadsides of work by the participating poets at each stop and follow the train’s journey online at the Maine Writers and Publisher’s Alliance website, or on the new Maine Poet Laureate Facebook page.

McNair's second project as Poet Laureate will begin immediately and continue throughout his tenure. He will sponsor a new column for newspapers across Maine featuring one previously published poem a week by a Maine poet from the present, or from the state's illustrious past. The name of the column will be Take Heart: A Conversation in Poetry, or more simply, Take Heart. Beginning in the first week of May, Take Heart made its first appearance in over 20 Maine newspapers, including all of the major dailies, creating a readership for each poem in the tens of thousands. The poems of Take Heart are also posted on the websites of libraries across the state.