Born in 1923, Ashley Bryan was raised in the Bronx, NY. At seventeen, he entered the tuition-free Cooper Union School of Art and Engineering, having been denied entry elsewhere because of his race. Encouraged by supportive high school teachers, Ashley was told, “Apply to Cooper Union; they do not see you there.” Admission was based solely on a student’s exam portfolio. 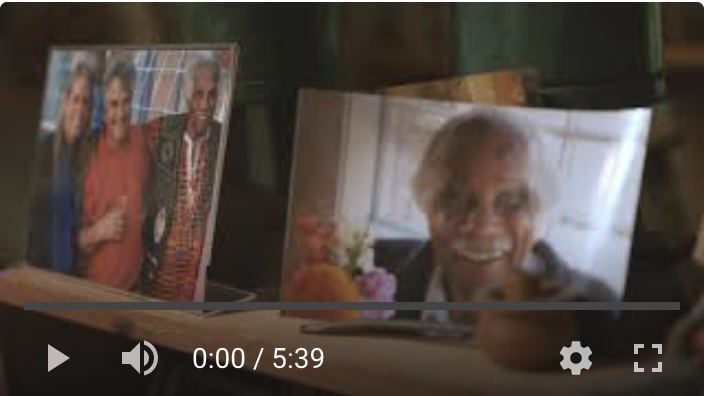 Drafted out of art school into the segregated US army at age nineteen, Ashley preserved his humanity throughout World War II by drawing, stowing supplies in his gas mask when necessary. After the war, Ashley completed his Cooper Union degree, studied philosophy and literature at Columbia University on the GI Bill, and then went to Europe on a Fulbright scholarship, seeking to understand why humans choose war. In 1950, renowned cellist, Pablo Casals, agreed to break the vow of silence he had taken after Franco came to power in his native Spain. Ashley was permitted to draw Casals and his fellow musicians during rehearsals in Prades, France, where Casals was in exile. Through the power of Casals’ music sessions, something “broke free” for Ashley: “I found the rhythm in my hand.” Meanwhile, Ashley published books—more than fifty to date.

Video Description: The Maine Arts Commission visited with Ashley at his island home in Islesford, ME. We immerse ourselves into the world of the artist, and learn about his life, his works, and his personal stories from World War 2 and beyond. Video produced by Ryan Leighton and Cody Mitchell.

Blessing of the Creatures

Tophat's founder and principal artist, David Worobec, is a classically-trained Opera singer and pianist. A graduate of the Boston Conservatory, David has performed in a wide range of settings and ensembles. He has an exceptional vocal range, and has trained across a broad spectrum of musical genres. His repertoire includes opera, showtunes, standards, and more. He is also an expert in miniature theater productions, and has staged hundreds of full stage shows in miniature form, complete with advanced lighting, stage sets, a miniature cast and props, and recorded orchestral accompaniment. 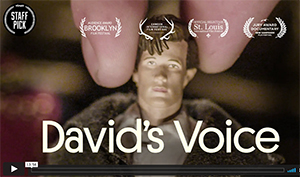 David Worobec is a classically trained vocalist who performs musical theater on miniature stages. Not content to play merely one character, he sings and performs every part with the help of an ensemble of action figures he’s carefully cast in each role. Through a series of intimate performances and conversations with David, his mother and others close to him, there emerges a portrait of an artist searching for his place in life. Directed by Graham Hill. Edited by Chad Carbone. 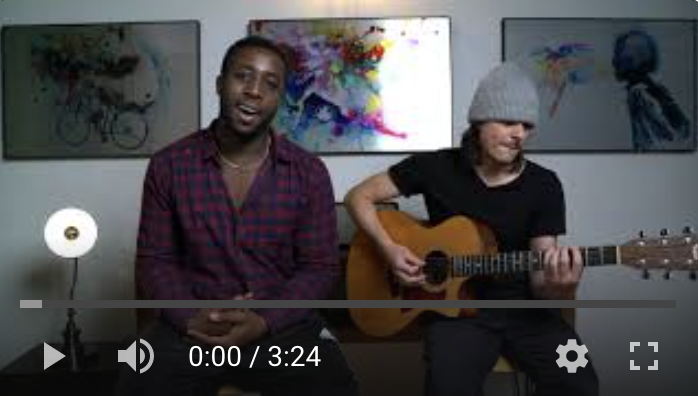 Michael O. is a singer, songwriter, performer and producer who harnesses his personal and cultural influences to create a powerful sound. Through music, he aims to build connections that break down ethnic, geographic, and cultural boundaries through his exploration of himself, his heritage, and of the world around him. Michael says it is a huge honor to be named a Maine Artist Fellowship recipient. More than the financial incentive, Michael says this award validated his mission to the arts and reassures himself that he is moving in the right direction. He plans to use the award to elevate his work, and hopefully, he says that elevation can help inspire Mainers in this new world we live in.

On The Road With Waterville Creates! - Travis Grant, Costume Designer

Knowing that many people lamented the limitations of travel this year, Waterville Creates! launched a video series this summer called "On the Road."  Thankfully we live in a state of extreme beauty with many fascinating places and people to visit. Waterville Creates! visited numerous destinations off the beaten path to explore incredible art, artists, and natural landscapes.

This video features costume designer Travis Grant as he discusses the ways that he creates incredible costuming for plays and musicals. For more On the Road, check out the Waterville Creates YouTube channel.

Waterville Creates! is a comprehensive resource for residents and visitors looking to explore and enjoy the arts in Waterville. As an inclusive collaborator, promoter, and advocate for artistic expression, Waterville Creates! connects artists, community,  and arts and cultural institutions to make the arts accessible to individuals of all ages and artistic abilities.

Palaver Strings at the Waldo Theatre 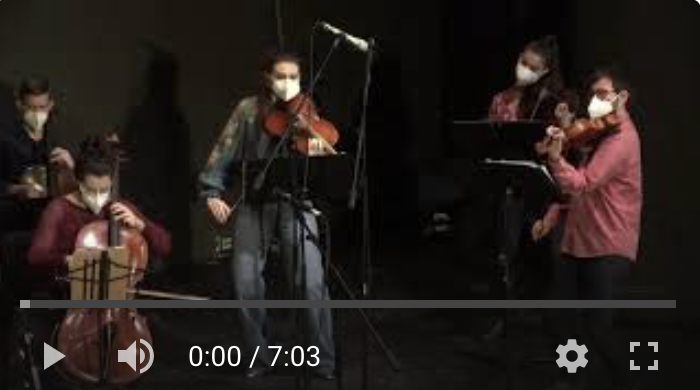 The Waldo Theatre in Waldoboro, Maine has been closed since 2014 and under renovation since 2017, with plans to open in fall of 2020. A more virtual world, born of necessity during a pandemic, now allows The Waldo to reach audiences far beyond the Midcoast region and to support the work of performing artists. Palaver Strings had been scheduled to perform on November 12 for many months, and this concert marks only the 2nd time this year so many of these musicians have been able to gather and perform live together. This piece is Rachmaninoff's Vocalise arranged by Palaver Strings' Ian Gottlieb.

As one-of-a-kind as it gets, Kenya Hall's artistry weaves together indomitable vocals with a fierce blend of soul and funk delivered with a rare energy that leaves every audience she sings to better for having been a part of it. Hailed as "A Soul Powerhouse" by Rolling Stone magazine, Kenya (she/her) is not only relevant in what she says, but poignant in how she communicates it. She is joined by Kafari (he/him), the alias of Portland, Maine-based pianist, percussionist and beatmaker Ahmad Muhammad. Their burgeoning collaboration takes inspiration from their longstanding friendship and a wide variety of musical traditions, ranging from jazz, hip-hop, classical music, all the way to old-time and bluegrass music through Kafari's love of the rhythm bones - an Irish percussion instrument popularized in America through blackface minstrelsy which he frequently distributes to and teaches his audiences.

Kenya Hall and Kafari performed together as part of the 'Jazz at the Lion's Club' music series on Peak's Island in September 2020, their first public performance since the covid-19 March shut-down.

Produced by Seven Eagles Media and N’we Jinanis, "Skicin In You" one of eight songs created and sung by Wabanaki Youth, two from each Maine Tribal Community, in 2017.  The music video reflects the work of young people of the Penobscot Nation on Indian Island.  The song is about overcoming the obstacles many Native youth face in order to thrive and live a good life. Breaking through silence, finding strength, being brave, and never giving up are some of the messages.  It is one of over 60 songs produced by N’we Jinan, a native-led non-profit that travels to Indigenous communities across North America to amplify the stories and voices of Indigenous youth.

Stuart Kestenbaum is the author of five collections of poems, most recently How to Start Over (Deerbrook Editions 2019), and a collection of essays The View from Here (Brynmorgen Press).  He’s the host of the Maine Public Radio program Poems from Here and was the host/curator of the podcast Make/Time. The director of the Haystack Mountain School of Crafts from 1988 until 2015, he has written and spoken widely on craft making and creativity, and his poems and writing have appeared in numerous small press publications and magazines including Tikkun, the Sun, the Beloit Poetry Journal, the New York Times Magazine, and on the Writer’s Almanac and American Life in Poetry.  Stuart Kestenbaum was appointed Maine’s poet laureate in 2016.  He's currently senior advisor to Monson Arts, a project of Maine’s Libra Foundation. He served as the organization’s artistic director from its inception in 2017 until 2020, designing and implementing a program that includes residencies, workshops, and community-based programs.

Poetry Reading: "Prayer for the World"

The process of creativity- how we make poems, organizations, objects--all begin with a gesture.  We get started and follow where our ideas lead us.  It's a journey that can confuse, surprise, and sometimes save us.

Emma Campbell has been the Dance Director at Thornton Academy in Saco, ME for almost ten years. One of the few thriving dance programs in a Maine public school, over 200 students in grades 9-12 participate each year. Content areas include contemporary dance technique, choreography, history, pedagogy, criticism, and performance aesthetics including costuming, lighting, stage design, and make-up.  They hold an annual fundraiser for grants, administered by the Commission, to support dance education opportunities at other Maine public schools.

"Togetherness" was created by Thornton Academy Dance students in 2019 as a call to action in response to the deep political chasm that many people in the US experience.  Students created the work to examine the ways in which humans push each other apart while continually yearning for connection.  "Togetherness" was created as a piece in two parts, but the filmed version of this piece is the second part of the live performance. Choreographed and Performed by: Emily Murray, Gabe Paulin, Gabriella Poulin, Aislinn Travis, and Danny Rand with direction from Emma Campbell. Film Concept and Videography: Dominic Dadiego.

DOB: July 24, 1947, Covington, Kentucky.  Air Force Veteran.  I was profoundly influenced by where I grew up, northern Kentucky, (I now live in Maine), and by my mother.  She was wild and creative and instilled in me a love for writing and creative expression.  I feel we are most creative when we write or do anything creative without goals or pressure - thus we are led to dreaming places - to memory, mystery, magic, adventure, love, regret and hurt - the broken places, where we find what is real and true.

Valerie is a retired Navy veteran of 20 years. She holds a Master of Science degree in Human Relations from Husson University in Bangor, Maine, and a Bachelor of Science degree, Industrial Technology, from the University of Southern Maine. She is an interfaith chaplain and currently studies with the Chaplaincy Institute of Maine. She explores art and writing as spiritual practice. Val is the founder and Executive Director of a 501(c)(3) non-profit formerly known as It's My Death. The non-profit, established in 2014 in Wiscasset, Maine, is now serving the state under the name Maine Death with Dignity. Val is the mother of three adult children  and an accomplished artist. When she isn’t doing death stuff (her son Travis’s description), she spends her time enjoying two amazing grandsons, Emmett and Fletcher, and working on a variety of creative projects.

Poetry Reading: "The Women I Know"

The poem is a reflection on the ways I've been influenced by the resilience of women. So it's not only about those I personally know, many of whom have encouraged and inspired me throughout my life, but about every woman. It's about the ways we live, work, sacrifice, celebrate, collaborate, love, laugh, cry, and keep going.

Jeffrey A. Morton COL is a resident of Augusta although he grew up in Boothbay and the Deep of South Portland. Married to Marleen Lajoie COL ARNG ret., he enjoys spending time with his youngest child, Tristan.  After 40 years of service in the National Guard, Active Service and Reserves, he is looking forward to early retirement with credit for Combat Tours served.  His most recent assignments were as faculty with Foreign Student Directorate of the Army War College.  His most recent deployment was as Divisional Chief of Staff.  While serving in several conflicts, his longest assignment was in Afghanistan.  COL Morton is branch qualified in Cavalry, Engineer, and Logistics. Poetic Muse- The first step in controlling your demons is to know them.  Learn their names and descriptions. By scribing these characteristics, you begin to control them.

This performance titled a ‘piece in peace’ was created for an offering commissioned by the Camden Opera House in October 2020, as part of their Soundcheck series. This was a unique opportunity for Shana to create a show with just her two children Dawud (18) and Nnenaya (16). The show incorporated themes of resilience, justice, joy, grief, growth, and family. The full version of the show is available here: https://youtu.be/FPWjX5CT8io