OGUNQUIT, Maine — These are the final weeks to visit the Ogunquit Museum of American Art to experience its 2022 season of exhibitions. The museum’s final open day will be Monday, October 31, after which the museum will close for the winter and reopen next May.

The last event of the season will be a Curator Talk on Tuesday, October 18 at 5 p.m. when OMAA’s Associate Curator, Devon Zimmerman, PhD, will speak about the museum’s permanent collection via ZOOM. The lecture is free to the public and registration is required.

"We had a fantastic season and look forward to sharing our plans for next year with our community," said Amanda Lahikainen, PhD, Executive Director of Ogunquit Museum of American Art. "Our new curator has been hard at work developing exhibitions that represent Maine artists as well as contemporary artists throughout the county."

Stay tuned for an announcement of the exhibitions that will be on view during the 2023 season which begins on Monday, May 1, 2023. 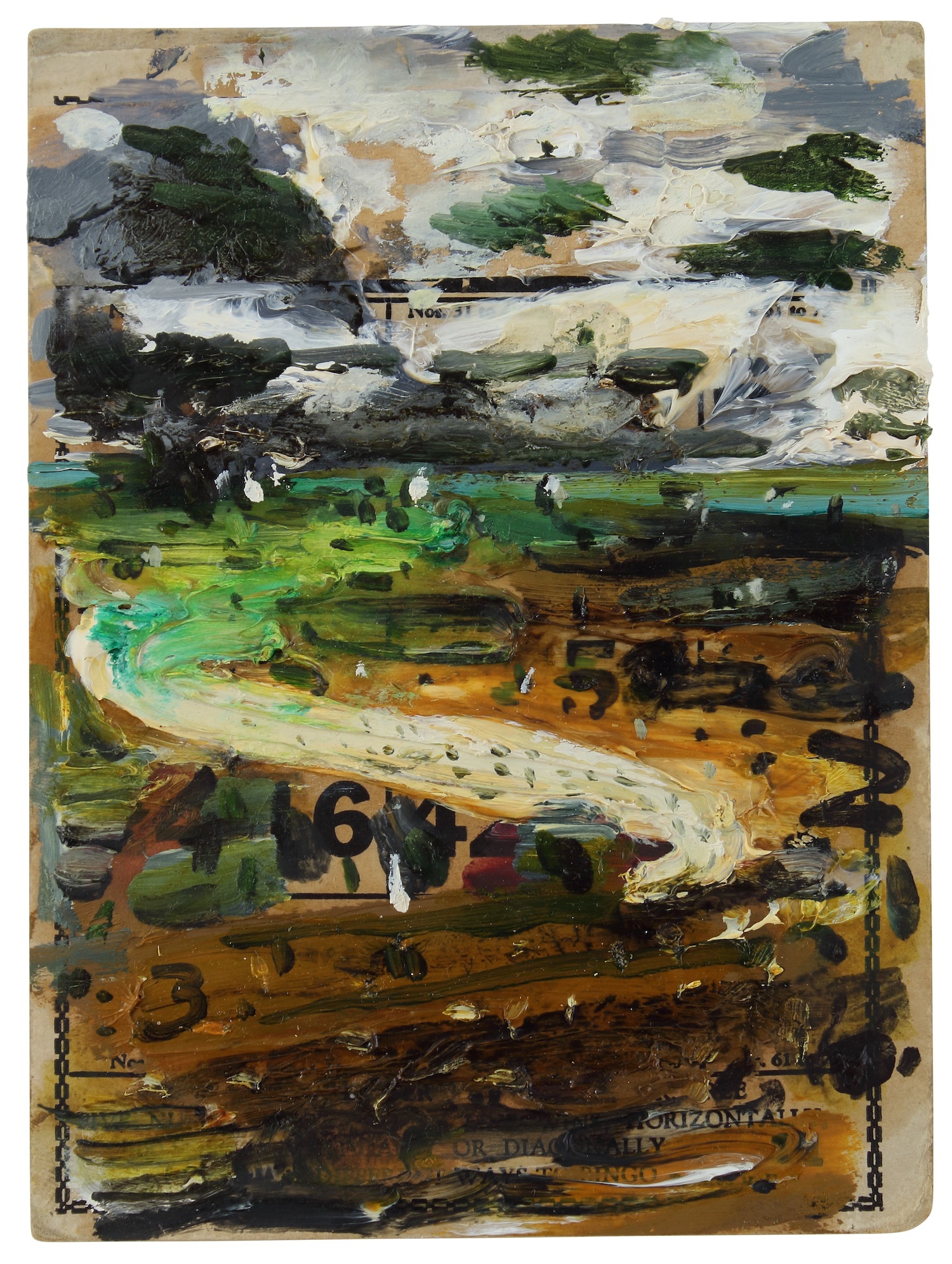 John Walker: From Low Tide to High Tide
When John Walker (b. 1939, Birmingham, England) first visited Maine, he couldn’t paint landscape. “It was too pretty, too scenic—I felt I couldn’t do anything with it.” Known for emotionally charged abstract work, the artist draws upon personal history and his love of art. A cinched-waisted shape pays sincere homage to Goya’s The Duchess of Alba, and in the 1990s, he was inspired by that painter’s meditation on the disasters of war to make paintings about his father’s traumatic WWI experience. Following that, landscape made sense. Still determined not to paint pretty pictures, he concentrated on mud and debris left by outgoing tides and incorporated dirt into his medium, repeating observations made by other artists that “paint is only colored mud anyway.” And, perhaps mindful of the capricious nature of war as a game of chance, he recorded mercurial shifts of weather on discarded bingo cards in paintings that are nevertheless monumental in scope. But large or small, “Low Tide” works from the early 2000s uniformly reflect upon loss and a kind of inherited trauma that poet Rosanna Warren describes as “pressed from memory’s trench.” After years of looking down at pools and rivulets formed by outgoing tides, Walker’s mood unexpectedly shifted. “It used to be I could only paint when the tide was out,” he says. “Now it’s all about water coming in.” Lighter and more open, his more recent “High Tide” work captures the zigzag reflection of the sun on fast-moving water, generously communicating a renewed optimism in painting’s ability to take us to places we’ve not yet been. 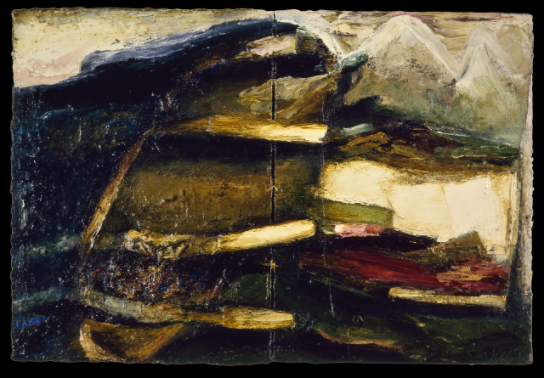 Sue Miller: Personal Voyage
Sue Miller’s (b. 1939, New York, New York) visionary painting is inspired by many things. Pulling from interests that range from mythology and art history to a love of poetry and music, she creates work that is simultaneously abstract and representational. Having sailed most of her life, she’s informed by the memory of coastal landscapes, by light reflecting off water, and by nautical forms. But while the artist might draw upon direct observation, her paintings are essentially abstract, richly saturated with color and expressive in their intent. Some incorporate personal letters or marine charts and when a student sent her a picture of a Viking ship two years ago, the square shape of the sail became a launching point. “It was the shape lifted into motion that energized me,” she later remarked about thickly painted work into which she’s integrated fabric and wood. “Eventually the subject wasn’t a boat or a sail. Instead, it became part of my own personal voyage into the act of painting itself.” 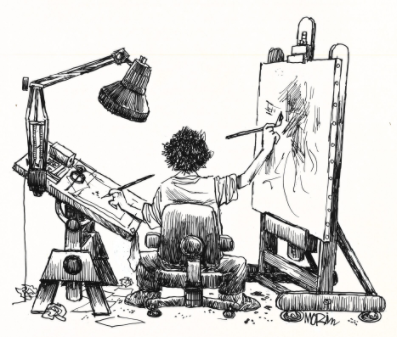 Jim Morin: Drawing and Painting
This season, OMAA is pleased to present the multi-faceted work of Jim Morin (b. 1953, Washington, DC). Best known as the distinguished editorial cartoonist for The Miami Herald for over 40 years, Morin is a longtime painter in oil and a multiple Pulitzer Prize winner in journalism for his cartoons. He stands out among his peers by connecting the artistic process of working in these two different media, noting “My paintings affect my drawings and vice versa.” This exhibition features a selection of the artist’s drawings and paintings that spotlight the environment and landscape. Morin’s enduring concern for the planet and how varied human activities impact it over time emerges as particularly compelling within the broad spectrum of issues addressed in the more than ten thousand cartoons made over his career. His keen interest in this topic sustains and underlies many of his paintings, which celebrate the beauty of the natural world and reflect a sense of place that includes the landscape in Maine, and in Ogunquit where he now lives and works. 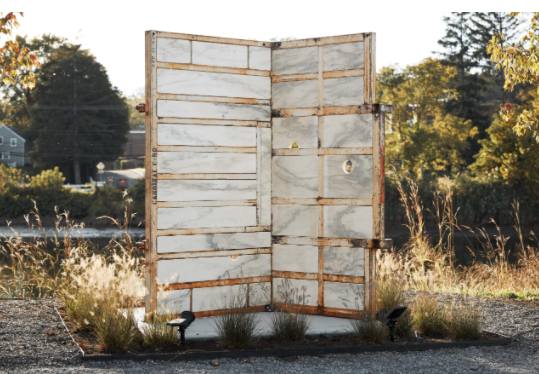 Virginia Overton: Untitled (Cardinal C-80)
OMAA is proud to present Untitled (Cardinal C-80) by Virginia Overton (b. 1971, Nashville, Tennessee) in its sculpture garden this season. Untitled (Cardinal C-80) is made from a steel frame stood on end to create an L-shape and inlaid with pieces of salvaged white marble. Previously used as a forklift glass carrier, the title references an industrial mark on the frame’s outer edge: “Cardinal C-80.” Through subtle and drastic interventions, Overton re-contextualizes once utilitarian items commonly associated with factories, farms, and construction. Often sourcing materials in the places where she works, Overton found the discarded steel carrier in the west end of Toronto, where the sculpture was first shown at Evergreen Brick Works in 2019. 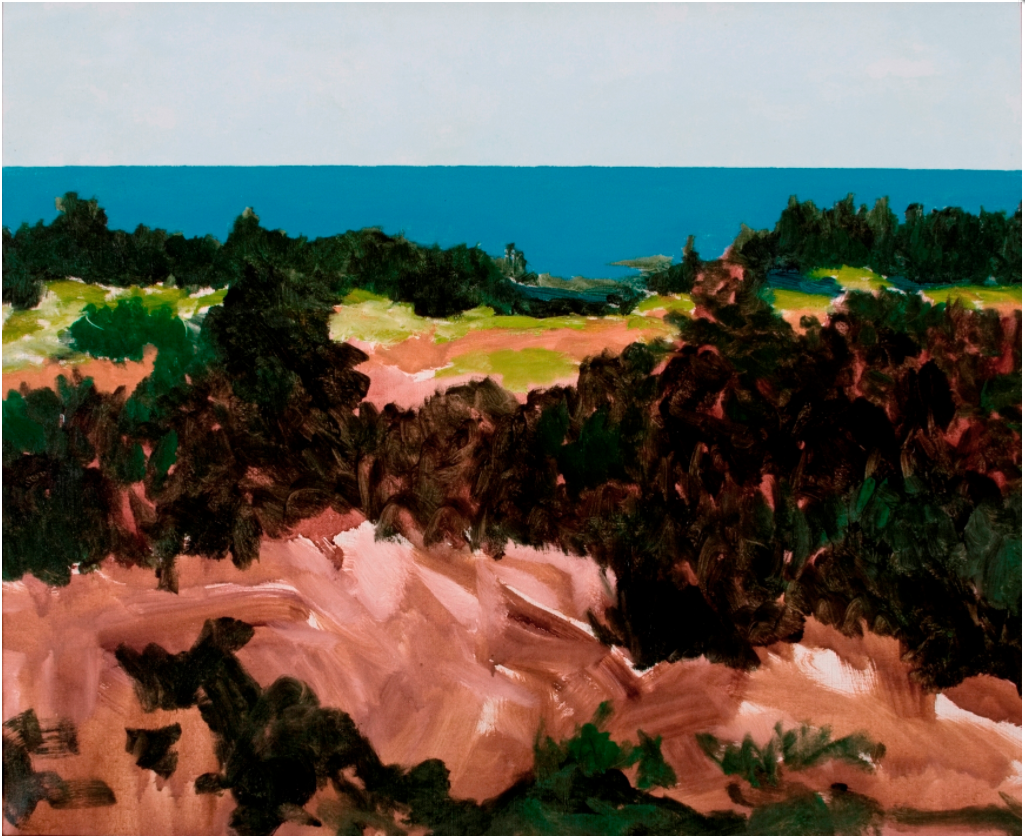 The View from Narrow Cove
At the turn of the 20th century, urban artists in search of new subject matter found inspiration in this stretch of coastline, forming schools, then communities. The resulting contribution to the greater art world seemed beyond the scale of the once sleepy fishing village that made it possible. Artists affiliated with diverse chapters of American art history, such as the Federal Art Project (1935–1943) of the Works Progress Administration, the Armory Show of 1913, the Ashcan School of the late 19th and early 20th centuries, and The Penguin (1917–1923) group in New York, came to work in Ogunquit, making connections and developing styles that would advance their work in Boston, New York, and beyond.  With selections ranging from the late 19th century to the present, The View from Narrow Cove draws primarily from the museum’s permanent collection and provides an overview of artists from the early years of Ogunquit’s artist colonies, including Charles H. Woodbury (1864-1940), Hamilton Easter Field (1873-1922), Yasuo Kuniyoshi (1889-1953), and Rudolph Dirks (1877-1968), among others. 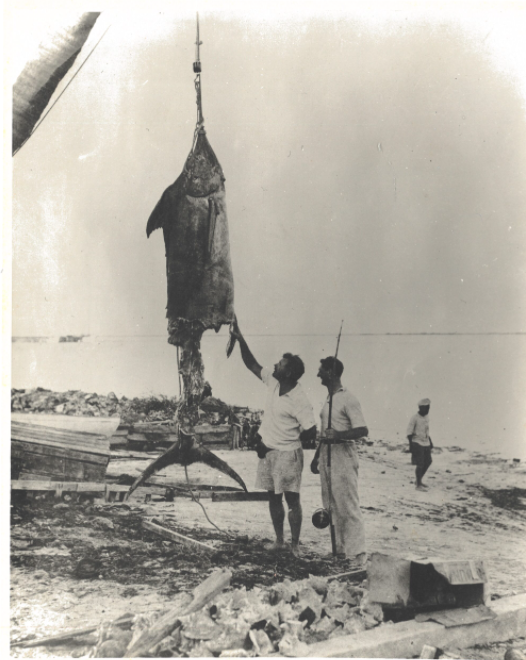 I’ll Bring  the Luck  with Me: Hunting and Fishing with Henry Strater
A significant theme for artist and OMAA founder Henry Strater (1896-1987) was what he called “the disorganized abundance of Mother Nature.” Strater was an avid hunter, fisherman, ‘polar bear’ swimmer, and adventurer. He kept pace with his friend Ernest Hemingway on globetrotting hunting and fishing expeditions, including the 1935 outing from Bimini rumored to have inspired Hemingway’s 1952 novel The Old Man and the Sea, from which this exhibition takes its title. In hunting-themed still life paintings of the 1930s, as well as in flower filled coastal landscapes of the 1960s, Strater’s observations reflect his passion for outdoor activities and are rendered in a signature brushwork as bold as his lifestyle. Through paintings, historic photographs, and personal memorabilia, I’ll Bring the Luck with Me: Hunting and Fishing with Henry Strater examines the connection between his occupation as a painter and his life as a sportsman. This exhibition brings together diverse works from various periods of Strater’s oeuvre, including Goldeneye Drakes (1933), which appeared in OMAA’s inaugural 1953 season, and The Bait Stealers, painted in Florida in 1966. 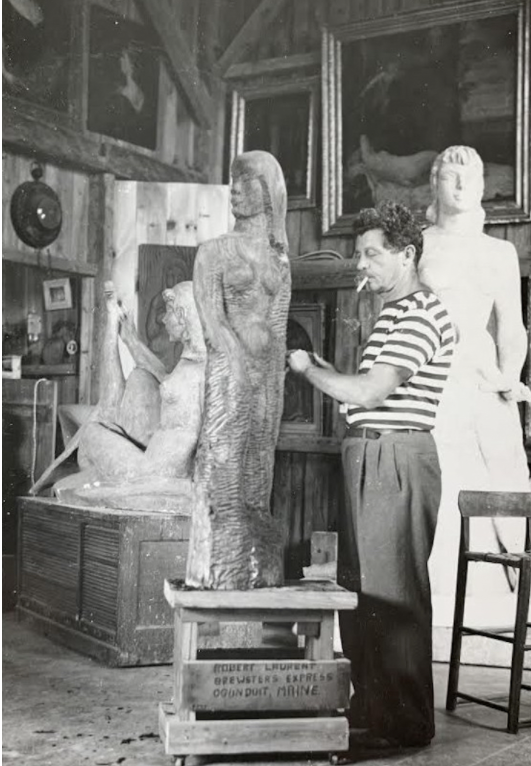 Robert Laurent: Open Studio
Displayed in a re-creation of his studio in Cape Neddick, Maine, Robert Laurent: Open Studio presents drawings, paintings, and sculpture by Robert Laurent (1890-1970) and artists in his circle. This exhibition brings the personal side of his practice to the forefront and provides a glimpse into the space of his artistic production between 1922 and 1970. By highlighting his interactions with Hamilton Easter Field (1873-1922), Wood Gaylor (1883-1957), Bernard Karfiol (1886-1952), Elyot Henderson (1908-1975), and his son John Laurent (1921-2005), this installation examines Laurent’s role in the Ogunquit artist colonies and the ongoing impact of his teaching career and legacy.

Hopeful: A Project by Charlie Hewitt
This season, OMAA is proud to participate in Hopeful: A Project by Charlie Hewitt. In 2019, Charlie Hewitt (b. 1946, Lewiston, Maine) was commissioned by Speedwell Projects, a nonprofit gallery in Portland, to create public art for its rooftop located at the nexus of five city neighborhoods. Hewitt installed a colorful and bright sign, lit with marquee lights and featuring a bold and simple message, “Hopeful.” The retro design is influenced by signs for roadside attractions recalling an earlier era. Hewitt collaborates with David Wolfe at Wolfe Editions in Portland on the design and with Neokraft Signs in Lewiston on fabrication. A commitment to working with local artisans and makers is central to Hewitt’s artistic practice. On January 20, 2021, Hewitt’s Hopeful sign in Lewiston appeared during the nationally televised Celebrating America event following the inauguration of Joe Biden as the 46th president of the United States. In addition to Portland and Lewiston, Hewitt has shown more Hopeful signs in Bangor and Brunswick, as well as in other cities and towns in Maine, and other states across the country.

About the Ogunquit Museum of American Art
Opened in 1953, OMAA was founded by Lost Generation artist Henry Strater. Closely tied to one of the earliest art colonies of the American modernist art movement, OMAA today houses a permanent collection of paintings, sculptures, drawings, prints, and photographs from the late 1800s to the present. The museum showcases American art by mounting seasonal modern and contemporary exhibition programs from May through October. OMAA’s seaside landscape—a three-acre sculpture park containing 18 small gardens—complements its exhibitions and overlooks Narrow Cove and the Atlantic Ocean. The museum is open May 1 through October 31. More information at www.ogunquitmuseum.org.