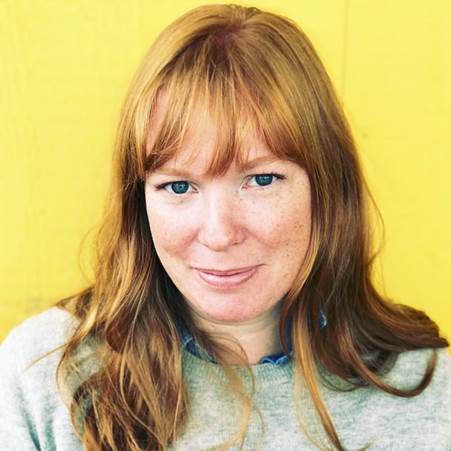 Brita grew up in the foothills of Western Maine and Studied Film and Television at the University of Vermont. After a stint as an independent film journalist, a 15-year career in network television programming at NBC brought Brita first to Southern California and then to New York. She served as network creative executive on NBC’s full slate of Emmy Award-winning late night programming, including Saturday Night Live, The Tonight Show Starring Jimmy Fallon, and Late Night With Seth Meyers, as well as on TV specials such as the Golden Globe Awards,Macy’s Thanksgiving Day Parade, and Tony Bennett Celebrates 90. During her tenure at the network, she also created, and co-ran NBC’s groundbreaking Late Night Writer’s Workshop. Brita launched Comedy Summer Hiatus in the Summer of 2018, an immersive retreat for comedy writers and performers that combined the rigor of a writers workshop with the escape and freedom of a classic Maine summer camp. Now returned to the State she never fell out of love with, Britamakes her home in Maine’s beautifully rugged and culturally rich Midcoast region.

What made you decide to apply for, and eventually accept, the Maine Arts Commission's Media & Performing Arts Program Director position?

This position and I found one another in a very serendipitous way, I think. I made a bit of a step into the unknown when I left a dream career as a TV creative executive to follow my other dream of returning with my family to Maine. The location move came first, but Maine is so rich in creativity and culture that I somehow didn’t doubt that I would find an opportunity to work and engage with performers and creators here, just as I did in Los Angeles and New York.  This role at the Maine Arts Commission fit the bill for me, in terms of what I had hoped to do here in Maine, in so many ways. The opportunity to work with the incredible creative community here and to help make sure that this state continues to enrich its citizens’ lives with access to the arts made this feel like the door to a second dream career.

When I met the folks who would become my leadership and colleagues here at the Commission, I realized that this was also an opportunity to be part of a team that shared these passions and this mission, so coming on board when asked was an easy decision.

What single event/choice has impacted your career the most?

In 2010, amid a lot of upheaval in the late night TV programming world and a lot of press coverage of the lack of diversity and gender diversity in late night writers’ rooms, a colleague and I got together over lunch and hatched a plan. Common wisdom was that this lack of representation owed to a wide range of institutional barriers that might be difficult, even impossible to overcome. My colleague and I knew that a vast world of diverse comedy talent was out there and we were determined to identify funny writers and to break down some of these invisible barriers that kept them from getting in the room. We recruited leadership support and launched the NBC Late Night Writers Workshop. The alumni group for this workshop now includes Emmy-winning diverse and women writers who work on almost every network and cable late night show and the quality and relevance of these shows is undeniably improved because there are more voices in the room.

Getting to see this initiative move from idea to fruition, I learned a lot about what a nudge of institutional support can do for a community of artists and for the quality of the creative product.

What is your favorite thing about living in Maine?

I love that, in many areas of Maine, you don’t have to make a choice between living a somewhat rural life engaged with the natural world and having access to great arts and culture. In many places, you really have to forego one for the other, but Maine really embraces both and many of the state’s richest arts resources exist in its far-flung corners and side-by-side with these stunning landscapes. You can paddle a canoe and see an opera in the same day, and who could say no to that?

What is a recent good book you have read?

I loved Tommy Orange’s “There There”.