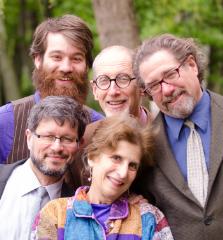 Casco Bay Tummlers will present a concert of klezmer music on December 18 at Meetinghouse Arts in Freeport. The Tummlers are based in Portland, Maine, and have been performing klezmer music all over the world since 1988. Their repertoire is versatile, ranging from original music to original arrangements of traditional dances and songs of the Yiddish theater and Jewish ghetto. Their unique sound and stage performance features all five members of the band. Steve Gruverman brings an extensive background in ethnic dance music to his soulful clarinet playing. Carl Dimow has developed a distinctive klezmer flute style, making the instrument an equal solo voice in the music. John Clark is a versatile bass player, perfect for the Tummlers eclectic approach to klezmer. Nancy Hoffman brings a playfulness to her accordion playing and singing that audiences love. Peter McLaughlin keeps the traditional role as drummer, including elements of both jazz and improvisation.

Arts and Cultural Alliance of Freeport