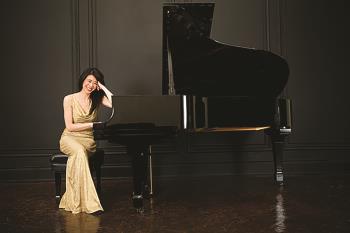 Kittery, Maine- Pianist Jenny Lin returns to The Dance Hall Kittery on Friday, November 8th at 7:30 p.m. with a new program titled “Glass Reflections." Lin is  “one of the most interesting pianists in America right now” The Washington Post, known for her charismatic stage presence and “remarkable technical command” The New York Times. In this program, Lin juxtaposes Philip Glass’ piano etudes with challenging works by Debussy, Liszt, Schubert and more, displaying the true universality of his music. Previously touring with Glass himself, Lin brings a technical brilliance and virtuosic facility to Glass’ lyrical and rhythmically demanding music.

Jenny Lin is one of the most respected young pianists today, admired for her adventurous programming and charismatic stage presence. Her concerts have taken her to Carnegie Hall, Avery Fisher Hall, Lincoln Center’s Great Performers, Kennedy Center, and many more. Since 2014 she has joined Philip Glass in his ongoing world tour of his complete Piano Etudes.

The Etudes Project is an ongoing exploration of the tradition and transformation of keyboard virtuosity in the piano repertoire. Inspired by her world tour of Philip Glass’ Piano Etudes with the composer himself, Jenny has created the Etudes Project with a series of programs juxtaposing new works alongside some of the most challenging works from the existing piano etudes repertoire. Various concert versions of the program will be performed in multiple venues throughout the season. Each program will be released in a series of volumes by the Sono Luminus label.
Tickets are $20 in advance and $25 at the door and can be purchased at www.thedancehallkittery.org.