Come Out Swingin'!: A Lewiston Story 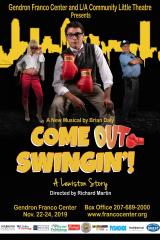 It’s the spring of 1965, two weeks before Ali – then still widely known as Cassius Clay - is scheduled to defend his heavyweight title in a rematch against the notorious Liston. Controversy surrounding Liston and some licensing problems in Massachusetts have forced the promoters to quickly find another venue for the fight. They choose St. Dom’s Arena (now the Androscoggin Bank Colisée) in Lewiston, just about the unlikeliest venue ever for a heavyweight championship bout!

A co-production of the Franco Center and the L-A Community Little Theatre, the show is about a lot more than boxing. “It’s a musical comedy with lots of laughs, and it’s set against the tectonic shifts happening in America in the 1960s,” says Brian Daly, who wrote the show. “But beneath the fun on the surface, it invites the audience to recognize our common humanity.”

“It’s more a story of the people of Lewiston and their reaction to that historic event. It’s really a story about Lewiston,” notes Richard Martin, who is directing the show. He points out that the full title of the show is Come Out Swingin’!: A Lewiston Story, because the real focus is on how Lewiston residents coped with all the excitement, media scrutiny, and how visitors perceived the city and its residents.

In the show we meet Lewiston City Hall staffer Mickey St. Pierre (played by Zachariah Stearns), who thinks the fight could really put Lewiston on the map. Local choir director Connie (Emma Jones) is set to accompany Robert Goulet on the organ when he sings the national anthem, and Boom Boom Vavoom, (Erin Marenghi) an exotic dancer, hopes to move up in show business by parading around the ring as the round-card girl.

Other colorful characters in the show include local know-it-all “Teddy One Thing” (Bill McCue); bookish young reporter Marcel (Jacob Sutherland); excitable Jeannette (Lynn O’Donnell) and her poker-faced daughter Cathy (Olivia Deschenes); and Bates Mill worker Germaine (Bre Allard), who insists that big shots who are coming to town will laugh at locals like her and her fiddle-playing husband Phil (Ernie Gagne).

We also meet Sarge (Dan Crawford) of the Lewiston Police Department, who feels honored to be put in charge of security for the fight until café owner Rita (Lucy Poland) tells him he’s being set up to take the fall in case something bad happens. And she just might be right: Mickey says reporters have told him that a hit man is on his way to Lewiston to assassinate Ali. And finally, there is Preston (Glenn Atkins), a very important visitor who comes to Lewiston before the fight.

The show features twenty original songs written by Daly, a published author who has written other screenplays and stage productions, including the screenplay adaptation of his book “Big and Hairy” for a Showtime feature of the same title starring Richard Thomas.

Daly and Martin emphasize that the show maintains its unique Lewiston flavor from beginning to end. “The Gendron Franco Center for Heritage, Culture, and the Performing Arts is rooted in the traditions of Maine’s French-speaking ancestors,” Martin says, “so it’s the perfect venue for this show. There are even a couple of scenes set in St. Mary’s Church, which is now the Franco Center!”