Gordon Thomas Ward in Concert at the Wilson Museum 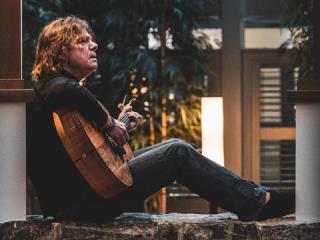 Experience the eloquent lyrics, musical storytelling, captivating rhythms, and enchanting voice of Gordon Thomas Ward on Thursday, August 22, during his acoustic performance from 7 to 8:30 p.m. in the Wilson Museum’s Hutchins Education Center. Called "one of the best singer-songwriters working in the Americana/indie scene today” by No Depression magazine, a concert with Gordon is the perfect note on which to end a summer evening in Castine. This program is free and open to the public, with donations to the Wilson Museum welcomed.

Gordon Thomas Ward is a charting GRAMMY-balloted singer-songwriter and recording artist who tours as a solo performer and has worked with notable musicians such as Eric Troyer and Mik Kaminski of the Electric Light Orchestra and has shared the stage and billing with Natalie Merchant and Christine Lavin. Gordon’s song stylings are influenced by the singer-songwriters of the late 1960s through the 1970s, yet his songs occupy a space all their own and fit into the contemporary folk rock, adult alternative, and Americana genres. Gordon’s fans have dubbed him “the total package.” Learn more about Gordon and hear music samples at www.gordonthomasward.com.