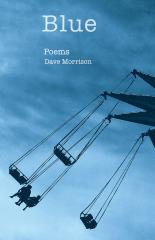 Poet Dave Morrison will be releasing his fifteenth collection, Blue, at a reading and book signing at the Rockland Library on Tuesday April 14 at 6:30 pm. Admission is free, all are welcome, books will be available for purchase. Celebrating National Poetry Month, Morrison will be reading from this newest collection.

Hailed as ‘a hearty weed in the garden of American poetry’, Morrison has published fifteen collections of poetry, and his poems have been featured in literary magazines and anthologies, as well as Writer’s Almanac, Take Heart, and Poems from Here.

“Dave Morrison’s poems are direct and clever in expression, vivid in image, explicit in emotion, and overflowing with perceptive awe for the everyday world and his own bewildering emotions. The universality of his sensibilities is something a writer either has or doesn’t have. It’s
nothing you can learn in a workshop. Blue has it, again.”

“With Blue, Dave Morrison deals out an entire array of moods, like a fanned hand of cards, offering intriguing insight into different lives, including the poet's own.”

Kristen Lindquist, author of Tourists in the Known World

Poet and editor Alive Persons says “There is no voice quite like his. What shines in every poem is musical sound and rhythm, grittiness, reality, humor, and the rare ability to tackle serious subjects without taking himself too seriously.”