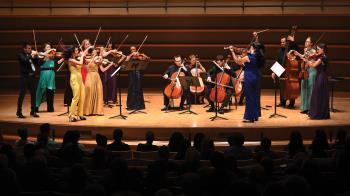 In her second year, PCMF Artistic Director Melissa Reardon takes the summer festival online with four streamed concerts. Staying true to original plans, the concerts feature all the originally contracted musicians, and include many of today’s most innovative and in-demand chamber artists. Festival programs are on August 6, 9, 13 at 7:30 PM. To ensure the widest possible access, all events have a pay-what-you-wish option, and will be presented via YouTube Premiere.

2020 marks the first-ever ensemble in residence for the festival, and this concert culminates in a full-ensemble performance from ECCO of one of its signature pieces – Bach’s Schmücke dich, o
liebe Seele. The stream will feature conversations with composers Jessie Montgomery and Derek Bermel, and a special performance by Time for Three. This event aims to raise awareness and funds for the Indigo Arts Alliance, a Portland-based organization that supports professional and emerging artists of African descent.