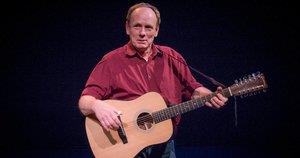 A rollicking, tumultous, triumphant sing-along musical memoir in 2 acts, this quintessentially Canadian creation pays tribute to celebrated American folksinger, social activist nd environmentalist, Pete Seeger, told in his own words and featuring 29 favorite songs from his year years (1935-70).  On its's very first tour to the US! Originally produced by the Other Guys Theatre Co., Victoria, BC, Canada, 2015.

"...Hellman shines...I can't remember a play that had me singing along so much." - George Straight (Vancouver, BC)

"...a beacon on the horizon that calls out to our better selves to respond, to act....this show, an old-style hootetnanny..you'll thank yourself for taking it in." - BrokenLegReviews (Vancourver, BC)