The Originals Present Wait Until Dark 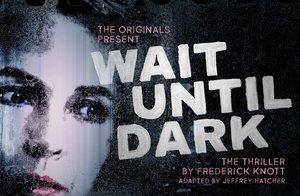 Forty-seven years after Wait Until Dark premiered on Broadway, playwright Jeffrey Hatcher has updated and refreshed Fredrick Knott's taut 1966 Thriller, now set in 1944 in Greenwich Village.  Susan Hendrix, a woman who has recently lost her sight in an automobile accident, becomes imperiled by a dangerous psychopath and a con man who are on a quest to retrieve a lost doll with a very valuable secret - a doll they are willing to kill for.  They believe it is in the apartment Susan shares with her husband, a war veteran and photographer away on assignment, into whose luggage the doll was slipped during his return from a recent trip to Philadelphia.  Unfortunately for the bad guys, Susan is not the helpless damsel they believe her to be, but a clever and resourceful fighter.  If she can stay alive until dark falls, she might just be able to turn the tables on her assailants and survive an inevitable terrifying showdown!  Featuring Jennifer Porter, Dana Packard, Mike Boland, William McDonough III, Emily Eberhart, and Lowell Jeffers.