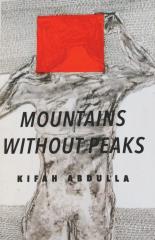 Join us as Denmark Historical Society, Public Library and Arts Center Collaborative presents the Authors Series and an afternoon with Kifah Abdulla on ZOOM.

Artist, writer, poet, activist, soldier, POW, exile, teacher, performer and world citizen; all of these words describe Kifah. Mountain Without Peaks is Kifah Abdulla’s poignant story about life in Baghdad in the early 1980s, his compulsory military service during the Iraq-Iran war, and being captured as a prisoner of war.

“Kifah Abdulla’s memoir “Mountains Without Peaks” is filled with unexpected beauty on every page. My heart ached in the opening section in which Kifah recalls his final seven-day leave visiting family and friends in Baghdad before being sent back to the front lines in the Iraq-Iran War of the 1980s. With concrete and evocative language, Kifah puts me in the front lines where he and artillery shells explode around them both night and day. Most amazing of all is the goodness that Kifah finds in his life even as a newly captured prisoner of war. His book is filled with love, wisdom and compassion.”

“Exceptional: lucid, crisp, meditative, and heartbreaking. As if in chiaroscuro- miniature detailed paintings, he reaches home life in Baghdad during the war, that world closing and disappearing as the war unfolds.”