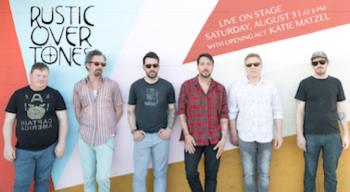 Rustic Overtones are a seven piece rock band from Portland Maine with a discography that spans 20 years. The bands unique version of indie rock is strongly influenced by soul music, garage punk, jazz and psychedelic music of the 60's and 70's.

With opening act Katie Matzel, an up-and-coming singer and songwriter from Portland, Maine who released her debut EP at the start of 2018.