A CHRISTMAS CAROL will Will Rhys 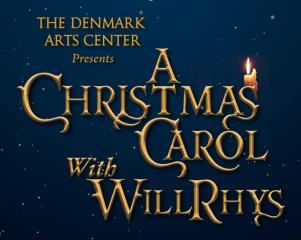 We will be following current CDC guidelines for this performance.

Mr. Will Rhys returns with his one-man adaptation of Dickens’s magical tale “A Christmas Carol”.  Will creates this unique production in which he weaves together the joy of story-telling with his skills as an actor to bring each character vividly to life.

Mr. Rhys is a founding member of National Theatre of the Deaf and was appointed an artistic director of the company in 1992. From 2001 to 2008 he served as education director for Goodspeed Musicals in East Haddam, Connecticut and was the librarian for Goodspeed Musical’s Scherer Library of Musical Theatre, which houses the second largest collection of musical theater material in the United States.

In Maine, where Mr. Rhys now makes his home, he has directed at Theater at Monmouth and appeared in productions with Freeport Shakespeare Festival, American Irish Repertory Ensemble, Portland Stage Company and Good Theater. At Good Theater he was lauded for his performance of the role of Gunner in “The Outgoing Tide,” and his “A Christmas Carol” is among Good Theater on Tour’s offerings.