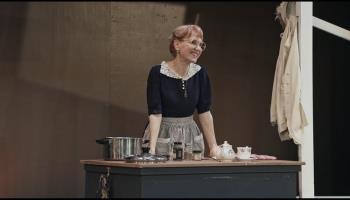 This play, written and performed by Vicki Summers, is about her beloved grandmother, a Russian Jewish immigrant who escaped the pogroms and created a life for herself and her family in America. In addition to the role of her grandmother, Vicki plays numerous other characters in the play. It's a story of courage, loss, humor and love, universal themes which touch us all. Vicki's primary mission, other than sharing her grandmother's remarkable life journey, is to encourage each of us to discover, share, and record our own precious family stories before they are lost to time.

Originally developed and performed at Cape Rep Theater in 2017, Bella, An Immigrant's Tale has since toured throughout Massachusetts, Rhode Island and Maine. Vicki has also performed the play in Daytona Beach, Atlanta and Los Angeles. The play appeared at the LA Women's Theater Festival in March, 2019. Most recently, Bella, An Immigrant's Tale was performed several times in the Spring of 2022 as a fundraiser to aid Ukraine.