Valentine's Day with Lantz and Kargul: To the Distant Beloved 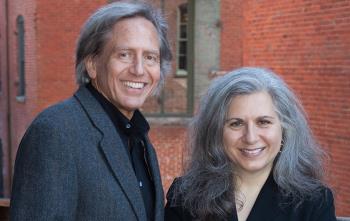 Violinist Ronald Lantz and pianist Laura Kargul will celebrate Valentine’s Day with a concert entitled "To the Distant Beloved" on Sunday, February 9 at 2:00 p.m. at Woodfords Congregational Church, 202 Woodford Avenue in Portland. As part of the Portland String Quartet Society's annual series, this event marks the eighth time the Lantz/Kargul Duo has celebrated the holiday of romance with a concert.

Sponsored by Dr. Newell and Tenney ‘79 Augur and Piper Shores.

Lantz and Kargul have drawn inspiration for this program not only from Valentine's Day, but also from the 250th anniversary of the birth of Beethoven, 1770-1827. To commemorate both they will perform a violin/piano version of Beethoven's groundbreaking song cycle, An die ferne Geliebte [To the Distant Beloved].

"It appears that Beethoven never enjoyed much success in his romantic life. People readily acknowledged his genius, but his difficult personality made romantic relationships challenging," says Lantz. "The great depth of his romantic feelings, however, is made clear by the letter he wrote to the 'Immortal Beloved,' a woman who remains unidentified to this day. This song cycle, the first ever composed, is thought to have been inspired by his love and longing for her."

Several other works on the program are drawn from vocal literature, among them two songs by Liszt, Oh! quand je dors [Oh! when I sleep] and O Lieb [O Love]. "Both speak of deep love and the pain of separation," says Kargul. "Known for his sweeping romanticism, here Liszt chose poetry that inspired moments of quiet intimacy juxtaposed with soaring lyrical lines. These songs work beautifully on the violin."

Songs by Fauré and Debussy will also make an appearance, as will shorter works by Schumann and Dvorak. For a more modern, mysterious and sensuous take on the idea of love and loss, the duo will perform the tango Soledad [Solitude] by Astor Piazzolla.

The final work on the program is the Poème of Ernest Chausson. "This is one of the most impassioned works in all of violin literature, says Lantz. "It was originally titled Le chant d'amour triomphant [The Song of Triumphant Love] after Ivan Turgenev's novella of the same name. A theme of this story, too, is the torment of longing for one's beloved across a great distance."

Ronald Lantz has taught and concertized in over 30 countries as a founding member of the Portland String Quartet. He has also performed with numerous symphony orchestras both as soloist and as principal player, and has served on the faculties of the University of New Hampshire, Bates College, the University of Southern Maine, Bowdoin College and Colby College, where he was awarded an Honorary Doctorate Degree. Mr. Lantz performs with a violin and bow made in Paris in the 1850's by the renowned instrument and bow maker, Jean-Baptiste Vuillaume.

Laura Kargul is the Director of Keyboard Studies at the University of Southern Maine School of Music. She has appeared as a soloist and collaborative artist throughout Europe and the USA, as well as in Canada and the West Indies, in venues such as the Amsterdam Concertgebouw, the Schleswig-Holstein Music Festival, the Liszt-Haus in Weimar, the Aspen Music Festival, the Evian Festival of Chamber Music and the Chamber Music Festival of Lucca in Italy. She holds a doctorate in piano performance from the University of Michigan, where she studied with pianists Leon Fleisher and Theodore Lettvin and conductor Gustav Meier.

Lantz and Kargul formed their duo after performing together for the first time at a Portland String Quartet concert in 2010. Over the years, they have appeared at venues from Maine to Jamaica.