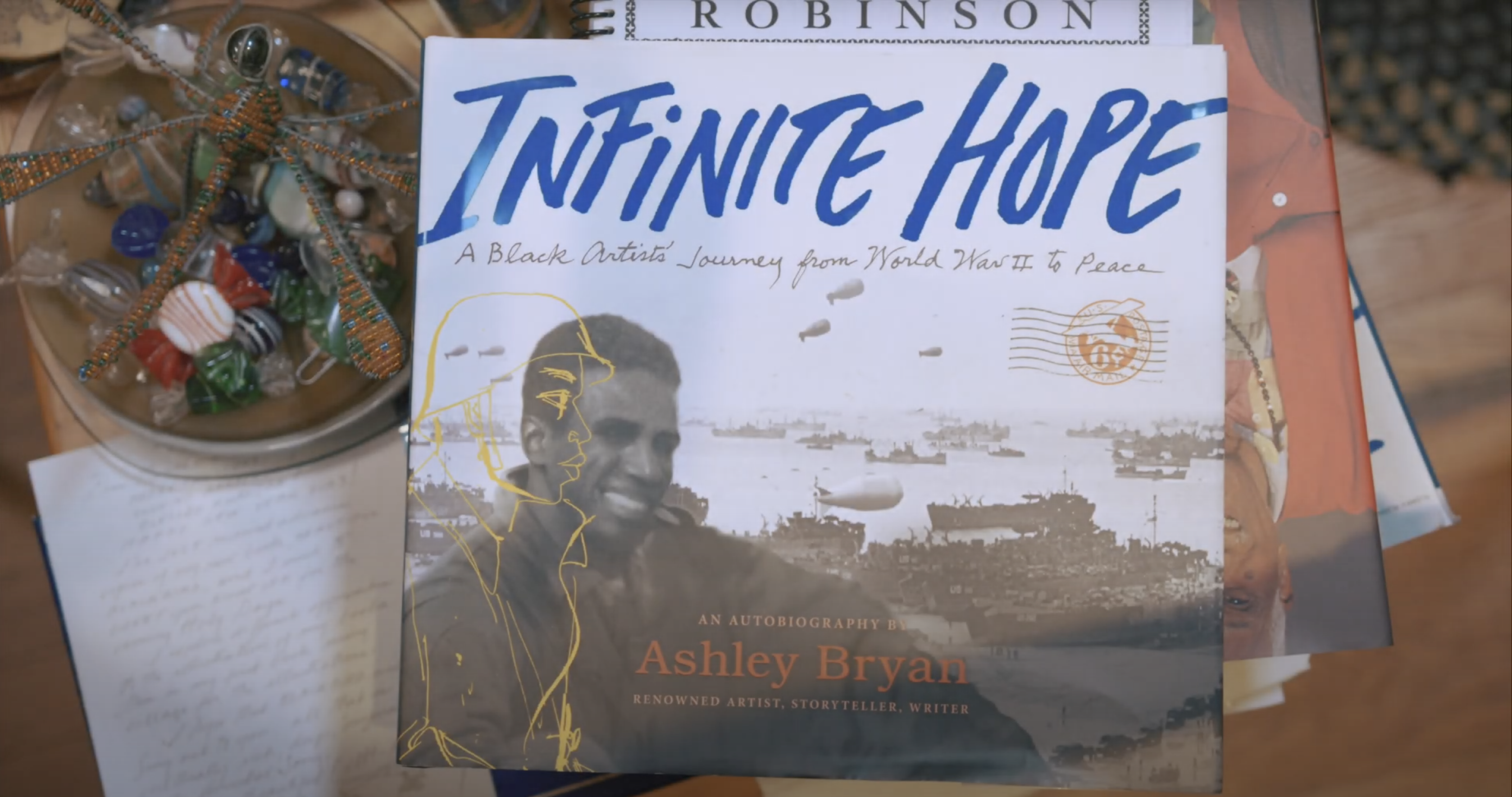 The award-winning artist, storyteller and writer, who turned 96 in July and makes his home on Little Cranberry Island, provides a riveting and revelatory first-hand account of his experiences as a stevedore (or longshoreman) in the all-Black 502 Port Battalion. Bryan shaped the story around letters he wrote and drawings he made during his three years in the service.   READ MORE>

Bryan begins with the arrival of his draft notice in early spring, 1943, while he was studying art at Cooper Union in New York City. His mother had a humorous response, considering the occasion: “Son, what will you do when there’s no icebox door for you to pull open every five minutes?”

What Bryan did was draw, and the deeper he got into the war, the more he drew, to advance his skills as a visual artist but also to escape the toils of daily work. Infinite Hope features his quick sketches and more finished ink, watercolors and tempera pieces depicting what he was seeing around him, from scenes in the training camp at Camp Miles Standish in Taunton, Mass., and billeting in South Boston, to portraits of his fellow soldiers and views of the places where he was stationed in Scotland and Europe. These images are set within and alongside vintage photos, maps, letters, and other documents, creating a brilliant collage design that lends the book terrific energy.

In his letters to Eva Brussel, a fellow Cooper Union student, Bryan describes army life. In one note he mentions that some of the “boys” are singing Negro spirituals in the back of the barrack. Later in life, he would illustrate several collections of spirituals and make a point of telling people who it was that wrote them: the slaves.

“War is Hell,” Bryan says in another note. Part of that hell was the systematic segregation of Blacks in the Army. While he had experienced discrimination in the northeast, this outright separation was new and ugly. Even when Black and white troops did the exact same work, he notes, “they were not permitted to do it together.”

While stationed in Glasgow in the fall of 1943, Bryan managed to obtain permission from the battalion commander to attend the Glasgow School of Art. The Scottish treated the Black soldiers like equals, something they were not used to, and that they welcomed. In an interview on Scottish radio last year, Bryan remembered their kindness—and recited some lines of Robert Burns poetry in the original dialect.

On June 2, 1944, the battalion set sail to join the armada headed for the coast of France. Bryan gives a detailed and disturbing description of the landing on Omaha Beach. The clearing of land mines was “left primarily to the Black quartermaster companies,” with the soldiers ordered to use their mess forks to probe the sand for anti-personnel bombs. The same soldiers were assigned the task of quickly burying the dead in temporary mass graves “so that the newly disembarking soldiers wouldn’t have to see the devastation and lose heart.”

In an effort not to lose his own heart, Bryan turned to his faith and his drawing. In a letter to an unnamed pastor, he describes going to a local church and of needing to be “led by the feeling of a strong internal power.” Elsewhere he writes, “[Drawing] was the only way to keep my humanity.” He kept his materials in his gas mask, which fortunately he never had to use.

On July 13, 1944, Bryan turned 21. In a letter to Eva he expresses wonder that he’s marking the occasion in France and notes one benefit: “I can VOTE!” Such optimism is offset by “sad thoughts” and feeling “low as hell”—and learning of the death of friends.

Sleeping in a foxhole under a low tent for days on end, Bryan and his fellow soldiers lived in constant fear of bombing, the danger lessened somewhat by the barrage balloons set up by a Black company. They continued to unload supplies from cargo ships floating off shore.

The battalion was eventually sent to the debarkation port in Le Havre where they were ordered to guard German POWs. Bryan highlights another example of acute prejudice: “On bus rides to the PX in Le Havre, the German prisoners were permitted to sit up front with the white soldiers and officers, while we Blacks were segregated to the back, just like back home.” And when they arrived at PX, the Black soldiers were not allowed inside.

The segregation extended to the end of the war when Black soldiers were among the last to find passage to America. “Only if there was an empty space free might one or two Black soldiers be allowed on those first departing boats,” Bryan recounts, “and only if those ships had a segregated section for the Blacks to quarter in.” He notes that the soldiers’ experience of equality overseas and the desire not to “reimmerse” themselves in an unjust society helped inspire the civil rights movement.

Bryan came home in January 1946. All during the war, he had shipped packets of drawings to his parents. They sat tucked away for forty years while he embarked on his journey as an artist and illustrator, gaining world renown for his books and art, being named a New York Public Library Literary Lion, and receiving accolades and awards for his work.

Many of Bryan’s friends didn’t even know he had served in the war. This fact came to light at the annual Children’s Literature New England summer institute sometime in the 1990s when he showed slides of some of his drawings. He put them away again, but then returned to them as a source for paintings, choosing sketches of men playing cards or dice as subjects. “This was a world they created, sheltered from the segregation and racism they endured,” he writes.

The pencil drawings are transformed into colorful expressive paintings, several of which are reproduced in the book. For Bryan, these works “open the door to many other unexpected possibilities—because what is life, if not a voyage of endless discovery.” No words more truly spoken by a man whose voyage never ceases to amaze.

[In their recent round-up of the last decade of art in Maine, Portland Press Herald writers Ray Routhier and Bob Keyes include Bryan in the category “Ongoing Lifetime Achievement.” In addition to his 2016 book Freedom Over Me being short-listed for the Kirkus Prize and receiving a Newbery Honor, they report, “There’s been a movie made about his life, exhibitions on the island and at the Portland Museum of Art, and the University of Pennsylvania recently acquired his archive.”]