An Uncommon Curiosity: At Home and In Nature with Bernd Heinrich 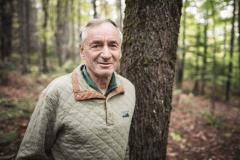 An Uncommon Curiosity:
At Home and In Nature with Bernd Heinrich

Augusta, ME … On April 3, distinguished writer and naturalist Bernd Heinrich makes a rare speaking appearance in Maine, where he will reflect on his varied and fascinating areas of expertise: bird behavior, insect physiology, patterns in nature, the pleasures of the outdoors … and running.

Professor emeritus in the biology department at the University of Vermont, Heinrich has published more than twenty books, including One Man’s Owl (Princeton, 1987), A Year in the Maine Woods (Addison-Wesley, 1994), Why We Run (Harper Perennial, 2002), and The Naturalist’s Notebook: Tracking Changes in the Natural World Around You (Storey, 2017).

The April lecture borrows its title from a documentary film about Heinrich that was released in 2011. The film follows its subject over the course of a year as he reflects on his past and shares his ideas about nature, science, art, beauty, writing, and running.

Running has been central to Heinrich’s life. He has won numerous long distance events, and he set a number of ultramarathon and masters records in the 1980s. Combining his knowledge as a physiologist, comparative animal biologist, and runner, Heinrich has theorized that the unique human capacity for long-distance running – which requires endurance, intelligence, and the desire to win – is a human adaptation similar to running adaptations in other animals.

The Friends of the Maine State Museum are delighted to host this true renaissance man, a naturalist-philosopher-athlete, whose breadth of experience and lively wit should inspire and entertain audiences.

This public event will be held at the Maine State Museum, 230 State Street in Augusta, within the Cultural Facilities Building adjacent to Maine’s State House. It begins with a reception at 6 pm and the program at 6:45. Admission is free.