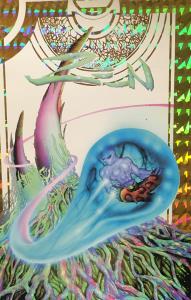 From Zombies to Zen: Cartoons and Illustrations by Dan Cote and Rick Parker

Lewiston, Maine, September 3, 2019 - LA Arts presents two extraordinary comic and graphic novel artists with ties to Maine in its LA Arts Gallery exhibition, From Zombies to Zen: Cartoons and Illustrations by Dan Cote and Rick Parker. The exhibition is on view September 4 through October 11, 2019 and will be the featured exhibition for the September 27, 2019 Artwalk LA. The LA Arts Gallery is located at 221 Lisbon Street in Lewiston. Gallery hours are Tuesday through Friday 12-4 and Saturday 11-3. The exhibition is free and the community is invited to attend.

Rick Parker is an artist, cartoonist, and writer, whose humorous work has appeared in the New York Times, The Village Voice, Life magazine and numerous comic books published by Marvel Comics. Parker is probably best known as the artist of MTV's Beavis and Butt-Head comic book, published by Marvel from 1994-1996. He was on staff at Marvel for many years and did lettering and production work on seminal comic series such as Spider-Man, The Avengers, Captain America, and GI Joe. Parker drew the introductory pages for the Tales from the Crypt series and has worked on numerous graphic novels such as Harry Potty and the Deathly Boring published by PaperCutz. He is currently working on a graphic novel about his experiences when he was drafted during the Vietnam War 50 years ago. Parker and his wife Lisa Trusiani, a writer and storyboard artist who also worked for Marvel Comics, live in Falmouth, Maine.

Born and raised in Lewiston, Maine, Dan Cote is a self-taught computer illustrator living in Los Angeles, California. He is the co-creator of Zen Intergalactic Ninja, a comic published by First Comics that he continues to draw 30 years after its debut. Cote and Steve Stern created Zen in 1985 when they met in Lewiston. Cote is a prolific experimenter. The first series of Zen comics was completely illustrated in airbrush, simply because he was infatuated with the technique and the results the medium could achieve. Original artworks using this technique are featured in the LA Arts show.

“I liked creating textures with the airbrush. No one was doing that at the time, “ said Cote. “The airbrush usually produced excellent wispy or shiny results, but I would introduce textures by laying things on the surface of the image, such as nylons, grape stems and wire.”

From Zombies to Zen is one of several exciting comic and illustration events happening in L-A in September. On September 21, 2019, The Great Falls Comic Expo, 2019 Fall Edition takes place from 10am-4pm at the Gendron Franco Center. And Kimball Street Studios, 191 Lisbon Street, Lewiston will present Infinite Canvas: Comics and Fantasy Illustration, an exhibition of works by talented local fantasy art and illustration artists, in time for the September 27 Art Walk LA.

Since 1973, LA Arts, the arts agency for the cities of Lewiston and Auburn Maine, has pursued a mission to engage and inspire a vibrant community through arts and culture. The agency works with governments, businesses, schools and local arts and cultural organizations to create opportunities for community members across the generations to experience, learn, and participate in the arts. LA Arts organizes arts programs and initiatives, supports the work of local artists and art organizations, and highlights the essential role the arts play in shaping an economically vital, socially integrated, and forward-looking future for its community. Learn more at www.laarts.org.