Heart of Biddeford in Running for $25,000 Music Series Grant 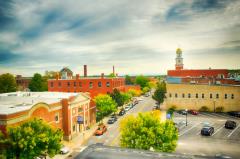 Heart of Biddeford in Running for $25,000 Music Series Grant

Heart of Biddeford is now in the running to bring a 10-week free, live music series to Biddeford next summer, and they are seeking support for an online voting campaign.

Sponsored by the Mortimer & Mimi Levitt Foundation, a national foundation dedicated to strengthening the social fabric of America through free live music, Heart of Biddeford hopes to qualify as one of the Top 25 finalists competing for $25,000 Levitt AMP Grant Awards.

The Levitt AMP Grant is an exciting matching grant opportunity created by the Levitt Foundation to serve small to mid-sized towns and cities with populations up to 400,000. The top 15 recipients will each be awarded $25,000 in matching funds to produce their own Levitt AMP Music Series—a free, outdoor concert series featuring a diverse lineup of professional musicians.

Heart of Biddeford submitted the proposal for Biddeford. The proposed venue site is Mechanics Park. Beginning Friday, Nov. 1, Biddeford’s proposal will be posted on the Levitt AMP website for public voting. levittamp.org

A successful campaign for Biddeford requires community participation to get as many people as possible to vote online to bring the concert series to town. Community support, as measured by the number of online voters, will be one of the key factors considered when the Levitt Foundation determines the 2020 Levitt AMP Grant Award winners. Each voter just votes once during the 20-day voting period.

“This grant would enable us to further bump up the quality, diversity and excitement in both Music in the Park and River Jam, which would become part of one LevittAMP series if we win,” explains Heart of Biddeford executive director, Delilah Poupore. Referring to Biddeford’s 2018 win of a $150,000 grant for restoration of the city hall clock tower, Poupore adds, “We have a very enthusiastic community, with successful online voting experience, so we think we can do this!”

Heart of Biddeford asks supporters to spread the word to family, friends, colleagues and neighbors and rally the community to sign up and vote for Biddeford’s proposal.