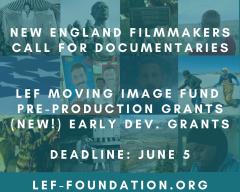 New England filmmakers, the LEF Foundation is now accepting Moving Image Fund Pre-Production Applications through June 5, 2020!  Up to six grants of $5000 will be awarded to feature-length (40+ minute) non-fiction film/video projects in development that are being directed or produced by New England-based filmmakers. In light of the COVID-19 pandemic, LEF will also be awarding six additional grants of $2500 in seed funding for non-fiction feature projects in Early Development.

LEF seeks to support work that demonstrates excellence in technique, originality of vision and voice, and creativity in form. Applicants for the Pre-Production grant must submit an application form, budget, and a video sample of up to 10 minutes from the current project being proposed for funding. Applicants for the Early Development grant must submit an application form, budget, and video work samples from two completed past works. If you have any questions about your eligibility or the application process, you're encouraged to reach out to LEF Program Officer Genevieve Carmel at gen@lef-foundation.org. Learn more here: https://lef-foundation.submittable.com/submit/