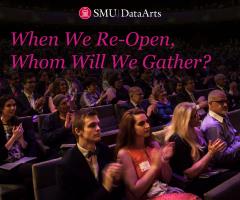 As performing arts organizations in the United States emerge from pandemic closures, SMU DataArts has released a new study to help these institutions address the question “When we re-open, whom will we gather?” and to take advantage of this time of reconnection to increase audience diversity.

The study, “The Intersection of Funding, Marketing, and Audience Diversity, Equity, and Inclusion,” examines pre-pandemic audience diversity, equity, and inclusion (DEI) along the dimensions of race and income at 24 large performing arts organizations in the United States to provide a baseline of past trends and a roadmap for the future. The new research is part of a series of recent publications by SMU DataArts that are designed to help arts and cultural organizations contend with the crisis of systemic racism.

Over the course of a seven-year period from 2011 to 2017, highlights from the report include:

How Can Audience DEI be Improved?

The report offers a number of ideas for improving audience DEI based on the study’s findings, including: