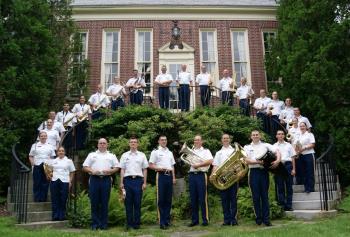 Live on the Stanley Subaru Stage on Sunday, July 21 at 2:00 pm, The Grand is excited to present a free musical salute to our country from the 195 Army Band’s Concert Band. Performing for audiences around the world and in their own backyard in Maine, the 195 Army Band’s Concert Band is carrying on a proud tradition of military bands past and present by presenting free patriotic public performances. The 195th Concert Band showcases a performance repertoire ranging from military marches to significant wind band works, Broadway medleys, and popular tunes, as well as featuring soloists from within the band and performing compositions by area composers and arrangers. Sponsored by The Ellsworth American, tickets for this General Admission presentation are free and available at The Grand box office. For more information on this or other Grand events, please call the box office at 207-667-9500 or visit The Grand website at www.grandonline.org or follow The Grand on Facebook.