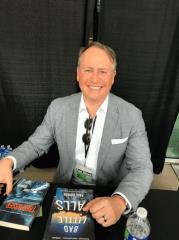 [This afternoon is going to be suspenseful and unique. Join us as Denmark Historical Society, Public Library and Arts Center Collaborative presents the Authors Series time with Paul Doiron & Kristen Lindquist. We are delighted Paul & Kristen can join us IN PERSON!

Author Paul Doiron, and poet Kristen Lindquist will read from their works with story and narrative poetry responding, bouncing, and complementing each other.

Paul Doiron is the author of the Mike Bowditch series of crime novels, including The Poacher’s Son, which won the the Barry Award and the Strand Critics Award for Best First Novel and was nominated for an Edgar Award, an Anthony Award, a Macavity Award, and a Thriller Award for Best First Novel, and the Maine Literary Award for “Best Fiction of 2010.” PopMatters named it to its Best Fiction of 2010 list. Paul may provide a glimpse into his new book titled Dead by Dawn to be released June 29th.

Paul is Editor Emeritus of Down East: The Magazine of Maine, having served as Editor in Chief from 2005 to 2013, before stepping down to write full time. A native of Maine, he attended Yale University, where he graduated with a degree in English, and he holds an MFA in creative writing from Emerson College. He is a former member of the Maine Arts Commission and past chair of the Maine Humanities Council. He is also a Registered Maine Guide specializing in fly fishing and lives on a trout stream in coastal Maine with his wife Kristen Lindquist.

Kristen Lindquist attended Middlebury College in Vermont and received her MFA in poetry from the University of Oregon. She worked many summers at the Bread Loaf Writers Conference. Her poetry and other writings have appeared in such venues as Down East, Maine Times, Bangor Metro, Northern Sky News, and Bangor Daily News, as well as various literary/haiku journals and anthologies. Her publications include the chapbook Invocation to the Birds (Oyster River Press, 2001),  Transportation (Megunticook Press, 2011), which was a finalist for a Maine Literary Award, and Tourists in the Known World: New & Selected Poems (Megunticook Press, 2017).