The Wondertwins’ To Hip Hop with Love 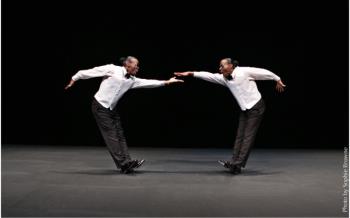 With the technical facility of hip hop, the sophistication of the glory days of the Cotton Club, the flash of Rat Pack era Las Vegas, and elements of vaudeville, robot, tap, and mime, The Wondertwins create a distinctive style all their own.

Six-time winners of Showtime at The Apollo Theater, The Wondertwins have appeared with Maurice Hines Club Harlem and toured internationally with Bobby Brown's Don't Be Cruel tour in the UK, and the Purple Rain Apollonias Since I Fell For You tour in Singapore.

The Wondertwins "dance in the same spirit as the great brothers of dance before them.”
- Maurice Hines, dancer-choreographer