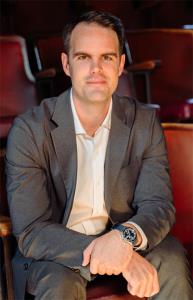 CELEBRATION BARN NAMES NEW EXECUTIVE ARTISTIC DIRECTOR, DAVID BRUIN
Celebration Barn Theater, Maine’s center for physical theater training, creation and performance, has named David Bruin as the organization’s new Executive Artistic Director (EAD). A seasoned leader and theater professional, Bruin will take the helm as Celebration Barn prepares to celebrate its 50th anniversary in 2022. His tenure as EAD begins October 18.
Celebration Barn opened a national search for the EAD position last May when outgoing Executive Artistic Director Amanda Huotari announced she would be stepping down. Huotari led Celebration Barn for 15 years and saw the organization through many pivotal successes, including the purchase of the Barn’s 11-acre property, major upgrades to its facilities, expansion of its faculty and workshop offerings, and deepening of community engagement (both with audiences locally and artists internationally). Bruin will build on this strong foundation and launch Celebration Barn’s next fifty years of inspiring creativity and community by harnessing the power of live performance.
David Bruin (he/him) is a dramaturg, producer, curator, and scholar of theater and performance. Since 2019, he has served as a co-curator of the annual Prelude Festival, a program of the Martin E. Segal Theater Center at CUNY. He was a co-artistic director of Yale Cabaret during its 2015-16 season, where he co-curated the inaugural Satellite Festival. As a dramaturg, he has collaborated with Robert Woodruff, Liz Diamond, Lars Jan, and Asa Horvitz, and he has produced new work by Jeremy O. Harris and Erin Markey. He has worked as a theater consultant for Scott Rudin Productions, and currently works as a creative consultant for Jeff Augustin. He is a co-editor, along with Melanie Joseph, of A Moment on the Clock of the World (Haymarket Books, 2019), an anthology of new writing inspired by the Foundry Theatre. He has held editorial positions at Yale’s Theater magazine, and his writing has appeared in Theater, The Brooklyn Rail, and HowlRound. His current book project considers the role of abjection on the postwar American stage.
“We were elated when David Bruin accepted the offer to become the new EAD,” said Celebration Barn Board of Directors President, Davis Robinson. “From his initial application letter to his final interview, David demonstrated a deep understanding and respect for the history of the Barn, a grasp of the details needed to run day-to-day operations, and a clear vision for growth in the future. The search committee was impressed by his commitment to the educational mission of the Barn – creating the next generation of theater-makers – and by his contacts in the professional theater world that will lead to some exciting new artists, teachers, and audiences in the years ahead. As he said in one interview, the Barn is a life-changing place. We’re all overjoyed to be part of this exciting new chapter for Celebration Barn with David in the lead.”

David Bruin expressed enthusiasm for his new role:
“I’m thrilled to come to Celebration Barn Theater as its next Executive Artistic Director. It is an honor to build on the extraordinary leadership of Amanda Huotari, and I am grateful to the board of directors for entrusting me to lead the Barn as it embarks on its next chapter.
It is vital that artists have opportunities to deepen their craft and collaborate with their peers through training. For half a century, Celebration Barn has provided just those opportunities to artists exploring the expressive capabilities of the human body onstage. As EAD, I look forward to building on this legacy by bringing the next generation of boundary-breaking theater and performance artists to the Barn to lead workshops, generate new work, and forge relationships with their professional colleagues and the local community in the Oxford Hills region. Above all, I am committed to putting the values of courage, justice, sustainability, and joy into practice through the Barn’s programming, operations, and community-building initiatives, as well as to advancing its commitments to antiracism, decolonization, and fair working conditions.”
Bruin has been working alongside Huotari since September to ensure steady operations and a seamless leadership transition. Celebration Barn is currently offering new online trainings, preparing to launch its next season of programs, and planning for its 50th Anniversary Celebration in 2022.
For further information about Celebration Barn, please subscribe to the Barn’s mailing list at www.CelebrationBarn.com or visit the Barn’s Facebook page. Celebration Barn Theater is located just off Route 117 at 190 Stock Farm Road in South Paris, Maine.