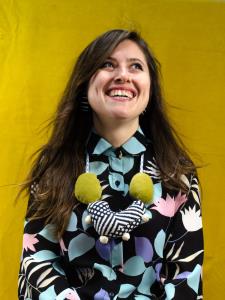 FARMINGTON, ME  (October 23, 2019)—The University of Maine at Farmington Art on Campus Program is pleased to announce that the work of two guest artists, Hale Ekinci and Dong Kyu Kim, will be on view in Mantor Library through December 19, 2019.

On display in the mezzanine is the work of Hale Ekinci, a Turkish artist based in Chicago. Ekinci expands on folklore, indigenous textiles, and her own experience as a foreigner immersed in an alien cultural landscape. Looking at the visual language of textile patterns and family photographs, Ekinci creates crochet-framed family scenes that document relationships while also recalling tapestries and headscarves.

Ekinci received her Master of Fine Arts in Interdisciplinary Arts and Media at Columbia College. She is Associate Professor of Art and Interactive Media Studies at North Central College in Naperville, Ill.

Artist and fashion designer Dong Kyu Kim, whose work, TransAmerica: One Temporary Migrant Worker’s Proof of Being or Existential Record, is displayed in the café and first floor of the library, immigrated to the United States in 2008 during the financial crisis. Kim is inspired by JoGakBo, the traditional Korean women’s craft of meticulously sewing together fragments of cloth to create patchwork textiles. Instead of cloth Kim uses receipts he has collected during his decade in the U.S., insignificant bits that together work to describe American capitalism and immigrant aspiration.

The Art on Campus program is sponsored by the UMF President’s Office and the H. King & Jean Cummings Charitable Fund of the Maine Community Foundation. Artists are selected by a committee of UMF art faculty and university staff.