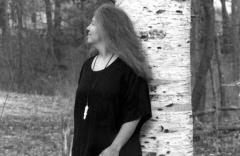 FARMINGTON, ME  (September 24, 2019)—The next topic for the New Commons Project is Cheryl Savageau’s “DIRT ROAD HOME,” a collection of poems that illuminate topics such as mixed ancestry, poverty, nature, and family, in words both tough and tender. An Abenaki poet, Savageau tells stories with her books and poetry about unrecognized women and the working class in Abenaki culture.

Born in Worcester, Massachusetts Savageau is a poet of Abenaki and French Canadian decent. She attended school at Clark University in Worcester where she later graduated and continued to study writing. She has been awarded Writer of the Year for her children’s book, “Muskrat Will Be Swimming,” and has also received multiple Fellowships in poetry from the National Endowment for the Arts and the Massachusetts Artists Foundation.

The UMF New Commons events related to Cheryl Savageau’s DIRT ROAD HOME are free and open to the public and will run between October 3-30:

The New Commons Film Series: DAWNLAND
The New Commons Film Series presents the 2018 Emmy-nominated documentary DAWNLAND, a powerful exploration of the U.S. government’s forcible removal of Native American children from their homes. As recently as the 1970’s, one in four Native children nationwide were living in non-Native foster care, adoptive homes or boarding schools. Many children experienced devastating emotional and physical harm by adults who mistreated them and tried to erase their cultural identity. DAWNLAND provides a space for them to share their stories for the first time.
Thursday, Oct. 3, 7:30–9:30 p.m., Lincoln Auditorium, UMF Roberts Learning Center

The New Commons Project is a public humanities initiative of the University of Maine at Farmington, Maine’s public liberal arts college, in partnership with the Maine Humanities Council. It is made possible by a grant from the Andrew W. Mellon Foundation. The project’s 12 topics so far have been submitted by people from around the state and represent some of the principles and cultural values that fascinate Maine citizens.

To learn more about the New Commons Project, or to submit a nomination for the next round of selections to be announced in 2019, visit the website at: https://newcommonsproject.org/