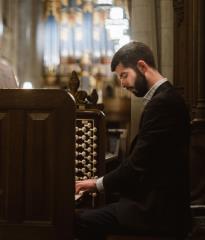 Blue Hill Bach celebrates Johann Sebastian Bach’s 335 birthday in a concert featuring organist Abraham Ross and the Zenith Ensemble, a professional ensemble of some of the finest singers in the country. Music on the concert will include Bach’s motet, Jesu, meine Freude, BWV 277, a setting of the same text by Felix Mendelssohn, the Fantasia super Jesu, meine Freude, BWV 713 for organ, the Prelude and Fugue in B minor, BWV 544, the Prelude and Fugue in E Major, BWV 566, and more. Abraham Ross, a native of Holden, Maine, was the 2016 Blue Hill Bach Young Artist Fellow, and was one of seven organists invited to participate in the 2019 Sweelinck International Organ Competition in Amsterdam. Zenith Ensemble members for the concert include Nacole Palmer and Jennifer Bates, soprano; Katherine Growdon, mezzo-soprano; Eric Christopher Perry, tenor; and Matthew Leese, baritone. Prior to the concert, the ensemble will work with local area high-school-age singers to prepare them to join in singing the motet’s chorales.