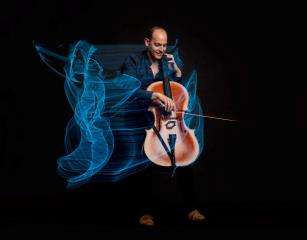 Mike Block is a celebrated cello player, singer and composer who is a Grammy Award-winning member of the Silk Road Ensemble;

Yo-Yo Ma has praised Block as the "ideal musician of the 21st-Century." Passionate about cross-cultural collaboration through music, Mike is committed to inspiring individuals and connecting communities. At home in a wide range of musical styles, through a multi-genre approach to composition, performance and education, he seeks to inspire audiences and empower musicians to find joy in the full world of music.

Mike is member of Yo-Yo Ma's Silk Road Ensemble (SRE), having joined in 2005 while a student at The Juilliard School. He has been featured as cello and vocal soloist, contributed arrangements and compositions, and earned a Grammy Award in 2017 for their album, Sing Me Home.

As an innovator, Mike is among the first wave of cellists to adopt a strap in order to stand and move while playing. Employing his patented design, The Block Strap, Mike was the first standing cellist to perform at Carnegie Hall. The NY Times characterized the performance as, "Breathless ... Half dance, half dare."

Over the following decade Gripper continued to push the boundaries of classical guitar both on his own and with other iterations of Sagtevlei. He released an inspired collaboration with Indian tabla master Udai Mazumdar and had one of his pieces adapted by acclaimed string ensemble the Kronos Quartet. Gripper's 2012 LP One Night on Earth launched a new phase of his career as he adapted the complex music of the kora (a 21-string African harp) for solo classical guitar. In 2015, he released a second collection of kora adaptations called Libraries on Fire.

Tickets are $20 in advance and $25 at the door and can be purchased at www.thedancehallkittery.org