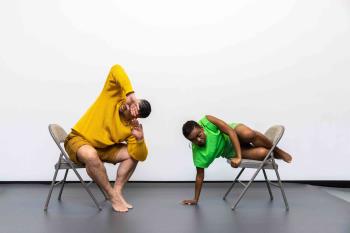 Two people. Two different people. Two different people dance and speak and negotiate a small space in a big world. They communicate through distance. They reveal and conceal from each other in equal measure. Inspired by ideas about Relation and opacity by Martinican philosopher Édouard Glissant, but mostly inspired by Willie Colon, Stevie Nicks, and the all consuming sadness that envelops everything, I as another is a new, strange, and personal duet by Miguel Gutierrez, created in collaboration with Laila Franklin. A tiny epic. What do people ever truly know of themselves, or of each other?

Miguel Gutierrez is a choreographer, composer, performer, singer, writer, educator, podcaster, and arts advocate who has lived in New York for twenty five years. His work creates empathetic and irreverent spaces outside of traditional discourse. He believes in an approach to art making that is fierce, fragile, empathetic, political, and irreverent.