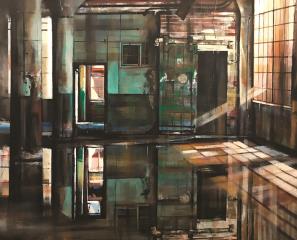 Jeff Bye: American Roots
October 3 - 26
Please join us!
Artist Talk, Saturday, October 5th at 1pm
Free and open to the public.
Please note, seating is limited, first come, first served.
In October, we are excited to present American Roots, Jeff Bye's fourth solo exhibition at Greenhut. In addition to being featured in the October 2019 issue of American Art Collector, Jeff was profiled in the Fall 2019 issue of Zest magazine by Portland Press Herald art critic, Dan Kany. The entirety of Mr. Kany's piece appears below:
Bye developed his chops studying at the Rhode Island School of Design (RISD), a summer program at the Portland School of Art [now the Maine College of Art] and the New York Academy of Art, where he completed his MFA. But it was during a year painting in Italy through RISD's European honors program that Bye developed a taste for painting old buildings-scars, marks and all.
Bye's 28- x 46-inch oil on linen Old Port features a backdoor view to Portland's hardscrabble working piers. The scene is charming, but in a brazenly local way. The house-like structures on a pier are practically teetering, barely holding each other up. The pilings are age-worn and weather beaten. This gets thrown into high relief when compared to the staid solidity of the stone walk and the 19th-century brick buildings rising up at the edges. A peek to the water just below the vantagepoint is impressively unappealing with waterlogged wood forms lurking just below the surface. It is still and surprisingly quiet; despite the teeming scene, there is not a living soul in sight. The wooden buildings are marked by graffiti and stained, but a closer look reveals many of the stains aren't totally tethered to the buildings-they are features of the surface of the picture. The stains are joined by drips of oil paint, the residue of making paintings.
Bye uses this type of texturing to create a dialog between the pictured image and the painting process. From his subjects, such as old buildings, urban scenes, wizened boxcars and gritty interiors, it is immediately apparent Bye is fascinated with the aesthetic effects of aging on structures. Visually, they are subtle subjects and hardly easy to paint.
With this topic, Bye lights up: "I love how things distress over time. It's why I thrived in Italy as opposed to Paris. Paris is tight and particular-it's not that patinated. In Italy, the laundry was out. The churches... there's so much to look at. You can just sit and look at anything-a doorknob." Despite his propensity for the gritty, Bye's painting is driven by his interest in light as well as texture. "Since I was a kid, my parents have had a place in Kennebunkport," he says. "I love the environment. I love the ocean, the clarity, the color. It's the light."
Bye works from drawings and photographs, but he prefers to do what he can on site. "I go back to a place as much as possible and at different times of the day so I can get a sense of the light. Photographs are helpful to work from, but I prefer to do watercolor studies to get the light right," he notes. Bye has 10 or more paintings going at any given moment. He found his best critical tool was taking time and getting space from his works. A painting session might feel right in the
moment, but he always steps back and returns with fresh eyes to make sure he's not being too sensitive or precious. Bye's inclination to return to subjects and individual canvases is all about refinement: It's not merely about finding new ground, but nuanced improvement and getting it right.
"The Old Port really captures my interest. There is something about Portland that always brings me back," says Bye. "At some point, I want to do some night paintings of Portland. I am interested in the clothing consignment shops and that type of environment."
"One of my favorite places to sketch is an old Gulf station on Route 9 going into Wells, particularly at night with its lights on. I have been a member of the Seashore Trolley Museum in Kennebunkport: I love the patinas of the old abandoned train cars, trolleys and motor buses-how they're aging and deteriorating. It drives my curiosity for exploring. I think you can feel it when a painter isn't curious about their subject."
As an instructor at Penn State Harrisburg and Elizabethtown College, both in Pennsylvania, Bye has the luxury of painting what he wants to paint, like abandoned buildings, old theaters and disappearing mom-and-pop establishments. He visits these places and makes drawings and studies. "But some abandoned buildings," he notes, "are hard to get into, so I need to use a camera. I just shot an old Loews theater in Connecticut that's about to be torn down." Once he gathers his studies, sketches and source images, Bye works on his paintings until they feel right to him. This can happen quickly, but some paintings stay in the studio for years.
"Your skills will always change," says Bye. "As you get older, you get better at what you're trying to say and push in your work. Some artists are all about skill and there's no substance to the work; and you want that combination of skill and presence in the work, the thoughtfulness of how you're working the paint, editing, etc. When you're younger, you need to develop skill and learn about color. How you're executing the paint will always be part of your work and that depends on
your life experiences. How you develop a painting: sometimes it's slow and methodical and sometimes it happens very quickly. It's about getting that feel. You need to have patience-and that comes with time. If you do the same thing over and over, you lose that curiosity and energy." That's not a problem for Bye, who exudes raw energy and is a curious guy.

Jeff Bye graduated with a BFA from Rhode Island School of Design in 1993 and was selected by the European Honors Program to study abroad for a year in Rome. He earned an MFA from the Graduate School of Figurative Art, in New York in 1996, and remained in New York for fifteen additional years working for the Metropolitan Opera painting murals while working on his own paintings.
In addition to being the recipient of numerous awards, Jeff is a member of the Copley Society and was awarded the Copley Master.  At that time, he was the youngest master in the organization's history.