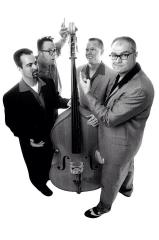 Denmark Arts Center is excited to be working with Norway Savings Bank and Bridgton Twin Drive-In to present this music series each Sunday end of August to mid- September.

King Memphis is Rock N’ Roll in the truest sense of the term. Over 20 years King Memphis has been preaching their brand of wild, swingin’ rock n’ roll across the United States and around the world. Formed in 1991 the young lads set out to bring a new sound to the scene with it’s roots in early rockabilly and swing music. Local press began to take note. This was no oldies show but a fresh interpretation of rare classic material mixed with original material written in that same authentic style. The boys were soon cutting tracks in local studios and creating recordings that caught the ear of concert promoters across the pond. Before they knew it they were packing their bags for England to perform for 4,000 screaming fans at the Hemsby Rock N’ Roll Weekender. The largest rockabilly music festival in the world with fans flying from as far as Japan, Russia and Australia for the 3 day event. The experience was a thrill but King Memphis had one more surprise in store for them. Their performance was witnessed by the owner of London-based record label Nervous Records. The band would be return home with their first recording contract and an advance to record their first disc.