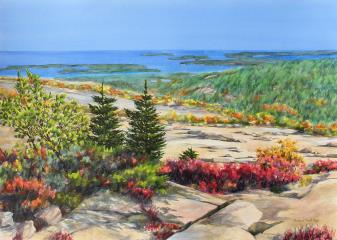 Barbara Prey Projects is pleased to celebrate their 20th season with Mother-Daughter: Two Generationsfeaturing the power-duo of mother and daughter Peggy Joubert Ernst and celebrated artist Barbara Ernst Prey. Barbara Prey is an internationally acclaimed artist famous for her large-scale watercolors and keen eye for the American landscape. Her paintings are included in major public collections including The National Gallery of Art, The White House, The Brooklyn Museum, the Smithsonian American Art Museum, The Kennedy Space Center and United States Embassies worldwide.  MASS MoCA commissioned Prey to paint the world’s largest known watercolor. She was appointed by the President of the United States to the National Council on the Arts, the advisory board of the National Endowment for the Arts.  She was invited to paint the official White House Christmas Card and her NASA commissions were part of the Smithsonian museum traveling exhibit NASA ART/50 Years.

Peggy Joubert Ernst was a gifted artist and head of the Design Department at the prestigious Pratt Art Institute in New York City. Well known for her textile designs (Peggy Joubert Designs) which appeared on fabrics around the world (some of these will be included in the exhibit).

This is the first time that the works of both mother and daughter are on view alongside each other.  Father/Son artists are commonplace—it is much rarer to see a mother/daughter artist pairing. It is also a timely exhibition for the 100th anniversary of women's suffrage and 200th Anniversary of State of Maine, the artists direct descendants  were the first settlers of Maine.