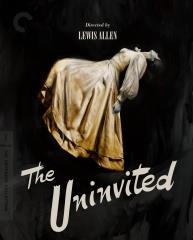 The Uninvited is a 1944 American horror film starring Ray Milland, Ruth Hussey, Cornelia Otis Skinner and Donald Crisp. The Uninvited was the groundbreaking film that has inspired so many movies following it.

While vacationing on the English coast, a pair of siblings from London, a composer Rick Fitzgerald (Ray Milland) and his sister Pamela (Ruth Hussey) purchase a surprisingly affordable and abandoned 18th-century house atop a lonely cliff in Cornwall only to discover that it carries a ghostly price. The owner, Commander Beech (Donald Crisp), who doesn’t tell the Fitzgeralds everything, associates it with the tragic death of his daughter and is willing to part with it despite his granddaughter Stella's (Gail Russell) objection. The Fitzgeralds move in and soon find themselves, with the help of Stella, battling it out with a very prickly ghost, and soon they’re caught up in a bizarre romantic triangle from beyond the grave.

While more modern complex horror films have heightened the suspense, this film still works wonderfully today because it is a simple story that doesn’t try to force itself onto us. And it still gives us a few surprises. The best part of the storytelling here allows us to connect to the material. Stella’s connection to the house comes from a traumatic past, the loss of both her parents, making us care deeply for her. Because of her, we want to know what happens next. The story becomes weirder and weirder, with some bone chilling moments, especially the moaning in the night. Little by little, the script shows us that the film is not nearly as simple as a mere haunted house story, as there’s more to this story than meets the eye.

Unlike many films of this genre, The Uninvited is a grade-A production from Paramount Pictures. Produced by Charles Brackett (a frequent screenplay collaborator with director Billy Wilder), the film is a handsomely mounted thriller with a first-rate cast, atmospheric cinematography by Charles Lang, Victor Young's emotionally gripping score, and a highly original story that invites Freudian interpretations of the characters while inserting a droll sense of humor.

Rich in atmosphere, The Uninvited, directed by Lewis Allen, was groundbreaking for the seriousness with which it treated the haunted-house genre, and it remains an elegant and eerie experience.  The classic score by Victor Young includes the introduction of the song "Stella by Starlight."   A tragic family past, a mysteriously locked room, cold chills, bumps in the night—this gothic Hollywood classic has it all.