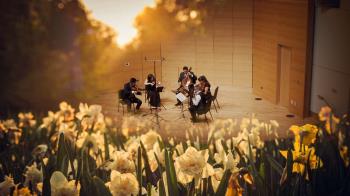 Remember is a brief elegy to the composer Eleanor Alberga's mother, into which she poignantly weaves a Jamaican folk song. Samuel Barber’s Dover Beach, a marvel of lyricism and masterful craftsmanship, uses rich imagery to take on the emotional weight and nuance of a world at war. Schubert’s lighthearted Fantasie, an exception to the darkness that haunts many of the late works written in his all-too-short life, showcases his divine melodic gifts with sparkling, stunning virtuosity. The epic season finale is Robert Schumann's piano quintet, noted for its exuberant character (his wife Clara, the virtuoso pianist for whom it was written, declared it "splendid, full of vigor and freshness") and expansive, triumphant musicality.