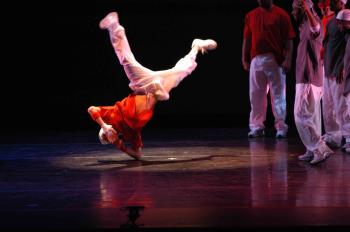 *Performances take place on Thursday, July 28 and Friday, July 29 both at 7:30PM

Legendary choreographer, Rennie Harris will restage his classic work, ‘Rome & Jewels to honor the 30th anniversary of RHPM. Critically acclaimed as an Elizabethan masterpiece, Rome & Jewels is a retelling of Shakespeare’s Romeo and Juliet set in the streets of Philadelphia.

Rome & Jewels is a story of fear, love, violence, and triumph that offers insight into many of the racial, religious, and economic questions we face.  The original production broke ground nationally and internationally, winning 3 Bessie awards, a Shakespeare Theater Award, and a nomination for the United Kingdom’s Lawrence Olivier award. As a performance, it accompanies a large body of work by RHPM that has built a tradition of offering global audience’s new connections to theatre and music while staying rooted in the best traditions of Hip-hop and street dance. Rennie Harris Puremovement is the longest-running street dance theater company in American history and is “the” preeminent ambassador and elder of Hip-hop and Street dance culture.

As leading Street dance theater company in America, Rennie Harris Puremovement is dedicated to preserving and disseminating Hip-hop aesthetics and Street dance culture through workshops, classes, history, lecture demonstrations, long-term residencies, mentoring programs, and public performances. With his roots in the inner-city, Harris presents a unique story, one that is riveting, intimate, and honest. He says it was Hip-hop that taught him honesty, humility, and purity. Rennie Harris Puremovement’s mission is to re-educate the masses about Hip hop culture and Street Dance through its artistic work. Harris’s work embodies the diverse and rich African-Diasporic traditions of the past, simultaneously evolving a new voice through dance. Harris is committed to showing  audiences a sincere view of the essence and spirit of Street dance rather than the commercially exploited stereotype portrayed by the media.