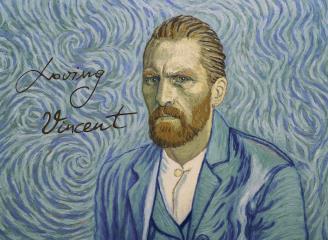 Loving Vincent is a 2017 film about the life and death of painter, Vincent van Gogh.  It is the first fully painted animated feature film.  Each of the film's 65,000 frames is an oil painting on canvas, using the same technique as Van Gogh, created by a team of over 100 painters.  It won Best Animated Feaure Film Award at the 30th European Film Awards in Berlin and was nominated for Best Animated Feature at the 90th Academy Awards.