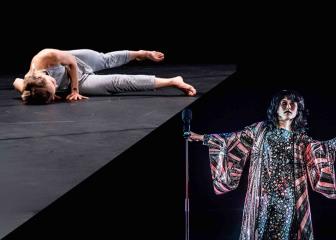 In Two, Shura Baryshnikov and cellist Adrienne Tayler, long term collaborators, have drawn upon their creative history together to build a process focused on deep listening, observation, and response. When examining the etymology of the word communication, we learn that it literally means “to make common.”  Within this fundamental pursuit, the duo has pursued shared choice-making structures, creating new – common – languages and modes of understanding through creative research into the vulnerable passage between choreographed/composed materials and improvisatory scoring.

IzumonookunI is a dance inspired by Izumo no Okuni, founder of the Japanese dance-drama form, Kabuki—a form that currently contains little trace of its female-centric, grassroots origins. Choreographer Aretha Aoki and sound and visual designer Ryan MacDonald are re-imagining Okuni as a punk rock/sci-fi figure in a landscape of built objects, digital design and live synthesizer. The piece touches on the tensions between erasure and hyper visibility and is an ode to the women in Aoki’s ancestry of whom little is known.