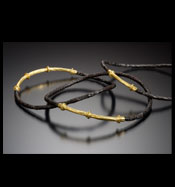 Robin Martin-Cust, from Deer Isle, is the Maine Arts Commission’s 2014 Functional Craft Fellow. She is a studio jeweler  living on Deer Isle. She was born and raised on a small farm in the Appalachian Mountains of North Carolina where she was introduced to forging steel by grandfathers, who were both blacksmiths.  When she arrived on Deer Isle in 1991, she served an apprenticeship with metalsmith, Ronald Hayes Pearson. This apprenticeship continued until Pearson’s death in 1996.

Prior to moving to Deer Isle, she earned a BS in Industrial Technology from Appalachian State University in 1985, and continued studies in metalsmithing at Arrowmont School in Tennessee, Haystack Mountain School of Crafts on Deer Isle and Penland School of Crafts in North Carolina.

Robin describes her work in an interview that can be found on the Patina Gallery website.

Forging has always interested Robin and she enjoys the direct contact with the tools and the material – the handmade element of the process – as well as the feeling of “incredible permanence “ that she gets with steel after forming it hot and letting it cool.  She also likes to juxtapose recycled scrap steel with 18k gold or platinum:  “It’s kind of fun to break the rules---to mix diamonds with steel and sterling.”

Other recycled materials frequently show up in Robin’s rings, earrings, and brooches: pieces of deer-rib bone, cross-sections of exotic wood, pieces of an old barrel-lid, and even aged steel from old bed-spring coils she found in a burned-out house.  Many of these things are found on island walks and hikes, and she is especially intrigued by the timeworn surface of the used or recycled object:  “I feel it is a metaphor for life…the experiences we go through that leave their mark on us.” 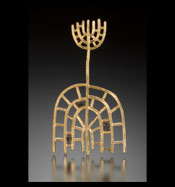 Her passion for used materials also carries over to her tools: “I absolutely cherish the fact that the tools had a life prior to my using them and that somehow they are imbued with the spirit of those people in years past who loved them and cared for them.”

Robin is also fascinated by boats; as an image, the boat has been a significant theme in her jewelry, a signature shape.  These boat renderings often resemble peapods, and have proved to be the most popular of her works.  She thinks this is “because of all that is tied up in my reasons for making them…the metaphor of a journey through life and references to certain cultures.” She feels she has only just begun to scratch the surface of this meaningful and powerful image.