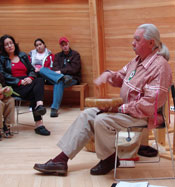 Watie Akins, from Brewer, is the Maine Arts Commission’s 2014 Traditional Arts Fellow and a Penobscot Elder who has dedicted more than a decade to the research, collection and performance of the traditional music of his people, which he performs using the hand drum and shaker. He has performed traditional music for over 30 years and is determined to use his skills to preserve Penobscot culture and language for future generations.

Watie was born into a musical family beginning with his paternal grandmothers’ generation up to his father and mother.  His grandmother was a music teacher of piano, guitar, violin and saxophone. She also played the piano at the local movie theater for Silent Films.  His father was well known throughout Maine as a pianist, clarinet and saxophone player. His mother, of Penobscot and Maliseet descent, performed with her sisters on the New York stage in various shows featuring “authentic” Indian performers.  Her older sister Mary Alice or Molly Delis was quitesuccessful and traveled to Paris with a musical group. 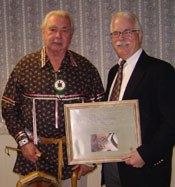 Watie has been both singing and drumming since childhood, encouraged to do so by his family he participated in Indian pageants starting at six years old.  From there he learned to play the drum, piano and guitar, before learning to sing.

Watie’s Tribe is Eastern Abenaki which include the Penobscot, Passamaquoddy and Maliseet tribes in Maine.  The Penobscot community where he was born is Panawampskeag, more commonly referred to as Indian Island, Old Town, Maine.  The small community when he was born has now quadrupled in size and that community has recognized Watie as a traditional performer of their music.

Watie states that the artform is important to him because it helps to preserve a part of the traditional style music that has been forgotten or lost to his people.  Its importance has led him to produce two CD’s, a Music Book and to perform two apprenticeship programs since 2007.  His goals are clear: to retain the culture of his people and to recover what they have lost. 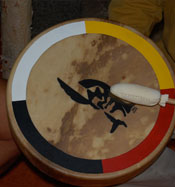 During the 1970s some of the young people traveled out west to various reservations to lend support to the American Indian Movement and were introduced to the Big Drum. When they returned to their reserves, they brought the Big Drum back with them and taught others. Watie believes that the Big Drum lacks the ability to blend with traditional Abenaki music and states that many of the current drummers lack knowledge of their traditional music.  He adds that many Abenaki songs have already been compromised by the influence of westernized music. Gone are most of the ornamentations of skips, grace notes, slides and plops, rests, rhythm and tempo changes, all those little nuances that flavored the music and made it uniquely ours. He realizes that music learned by being passed down verbally will change from generation to generation and really needs a “keeper”.