The Maine Arts Commission’s Fellowships reward artistic excellence, advance the careers of Maine artists and promote public awareness regarding the eminence of the creative sector in Maine. The awards are made solely on the basis of artistic excellence. Due to the competitiveness of the Individual Artist Fellowship program and to avoid conflict of interest, all jurors selected for this program reside out of state. The seven fellows for 2020 are: 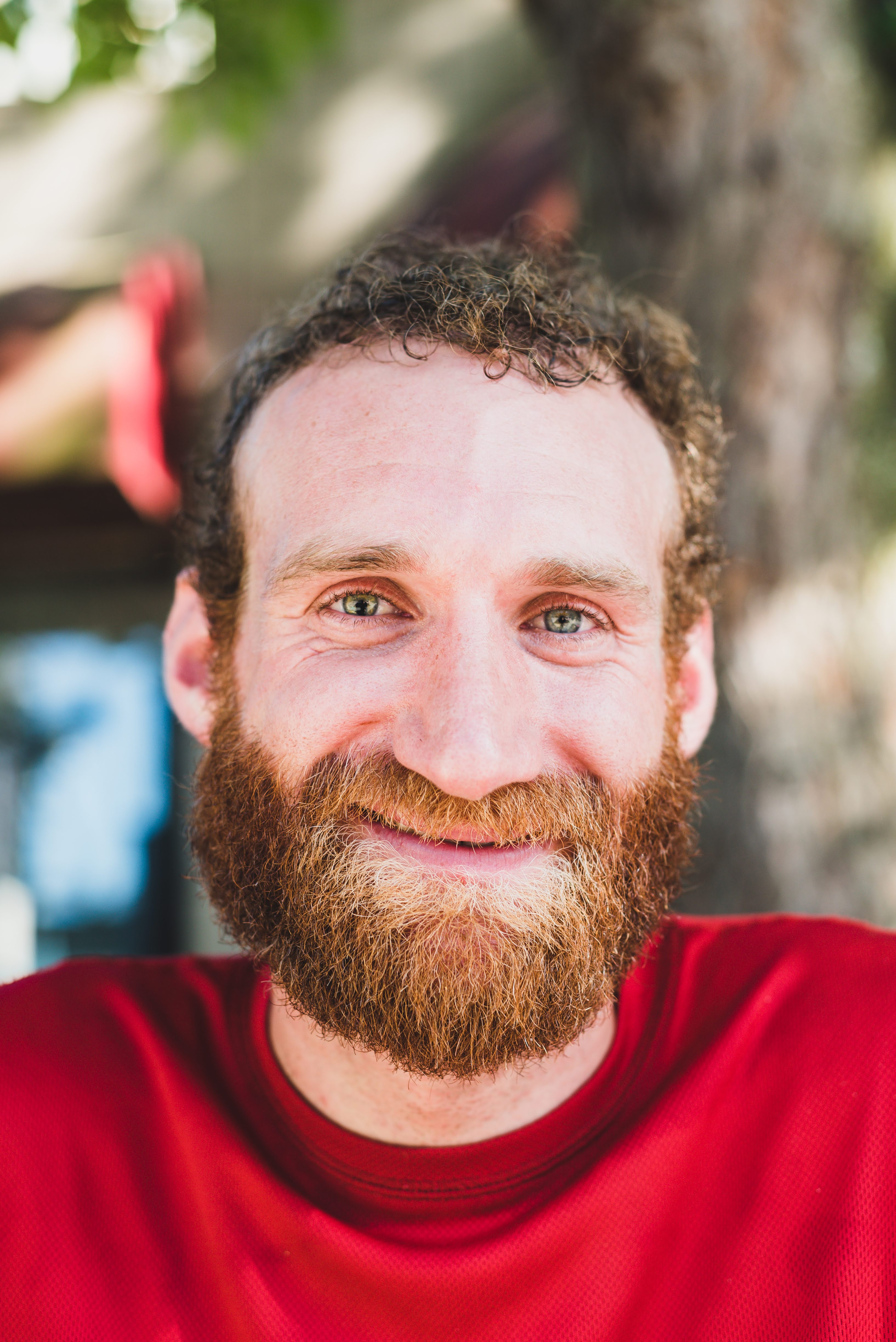 Joanoah Bailey has lived in Maine for nine years, first on Mount Desert Island, now on Peaks Island. Maine has been the place where his work has coalesced. Janoah mashes up artistic “disciplines” — puppetry, storytelling, juggling, dance — until he can’t tell where one ends and another begins. He makes puns to break language and layer elements together, forcing audience to juggle attention and perception. The work, he says, is balance amidst disorder: juggling attempts to even out the right and left halves of the body, unicycling hovers on a three-dimensional edge. The work becomes finding, emphasizing and creating patterns in mess — organizing chaos (for at least a few precious moments) until entropy pushes collapse once again. Maine has incubated Janoah as a performer. Studying agriculture, art and chaos at College of the Atlantic; creating through residencies at the Denmark Arts Center and Barn Arts Collective; teaching the Gym Dandies, a massive after-school unicycle troupe; interrogating movement and performance through The Living Room, a Portland-based dance collective; condensing his expansive shows to fit on a tiny stage at Mayo Street Arts. 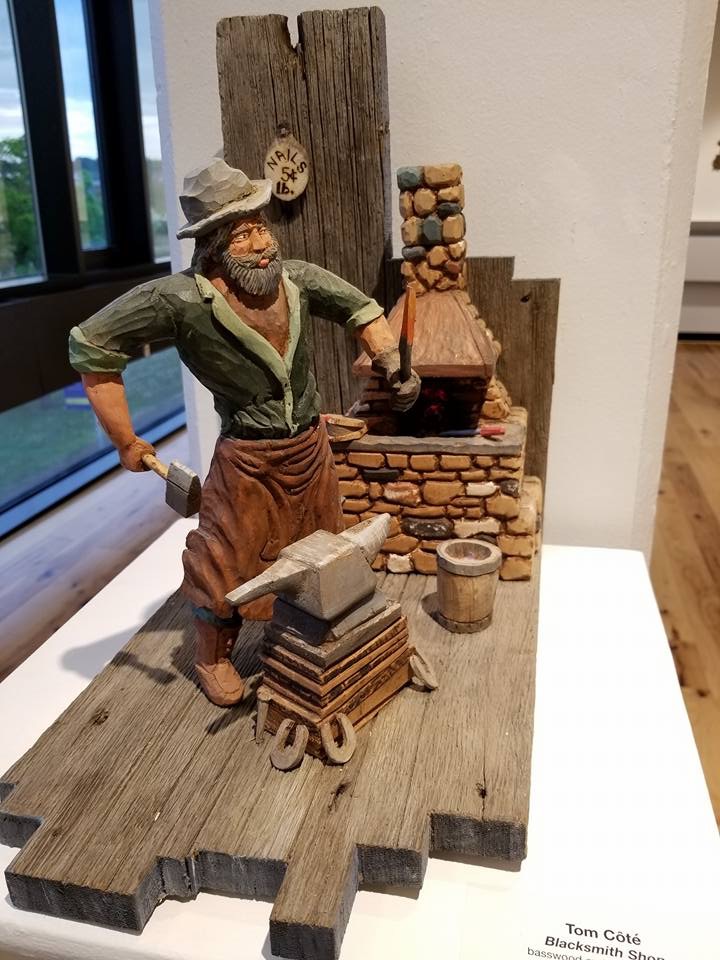 Tom comes from a long line of carvers. His mom was always whittling and carving. She taught him that design, function, and beauty are important elements of carving. When he was 12, his mom gave him a jackknife that he still uses. After his military service, Tom picked up whittling. He spent three years apprenticing learning the Canadian carving ways. Tom used his skills and incorporated wood carving into his art curriculum. In the 1980s, Limestone was the only high school in the nation offering wood carving as a fine arts course. Beginning intermediate and advanced levels filled immediately. Tom continues to work dilligently to promote wood carving as a fine art form. He started Top of Maine Carvers, teaches apprentices, exhibits shows, and teaches seminars and workshops. He has been artist in residence in Searsport, Haystack, and The Artistry of the Maine Forest. He has participated in the Bangor Folk Festival, Lowell Folk Festival, and the Mecca, St. Jean Port Joli. 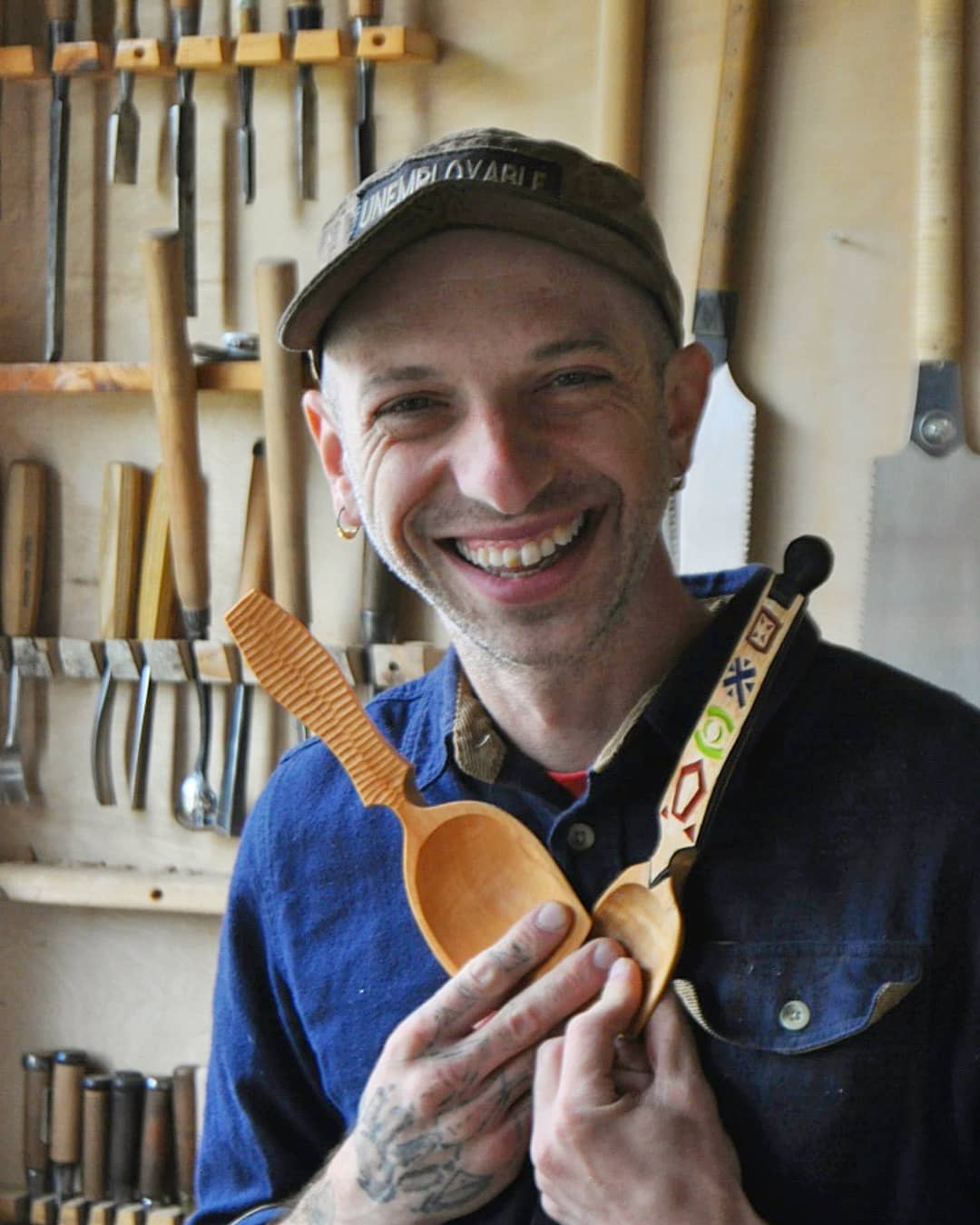 Aaron Margolis has lived and worked in Downeast Maine since 2011. He carves and creates spoons, bowls, sculptures, and other wares by hand from locally sourced, freshly-cut wood.  He thoroughly enjoys exploring and experimenting with bygone production techniques in his work and passes along that curiosity to others by teaching handtool-oriented woodcarving classes throughout Maine, including weekly open carving sessions at College of the Atlantic in Bar Harbor, and hosting one-time workshops to instill creativity at local community organizations. He has been a professional woodworker for 16 years, including experience in making functional, sculptural, and structural objects. He also co-owns SevenArts, a fine art and craft gallery in Ellsworth. His mindset about craft and work is influenced by the intense man-made environment of New York, where he was raised. He is a self-taught craftsperson with an artistic bent, and was shaped by the ethos and drive of the DIY punk scene of NYC. Aaron’s inspiration comes from the beauty of the natural materials of Maine, European and American folk and outsider art, the Swedish slöjd educational craft tradition (and the skills it promotes), and the Japanese concept of wabi sabi: finding beauty in the imperfection of the materials with which he works, and in his own ability as the creator of these objects. When not creating with wood or teaching, Aaron can be found selling his wares at fine craft shows from Maine to New York.

I’m originally from the Washington, D.C., area, and I began writing poetry in earnest when I was seventeen. After studying poetry almost exclusively in college, I went on to complete M.F.A. degrees in creative writing at the Universities of Houston and Iowa, respectively, and later a Ph.D. in English from the University if Cincinnati. It would not be an exaggeration to say that I shaped my entire life around my literary ambitions. In fact, Maine is the first and only place to which I’ve ever moved simply because I wanted to.I’ve published three books of poems and am now at work on my fourth. Moving to Maine definitely shook things up in terms of my writing because I was accustomed to pulling imagery from primarily urban settings. My poetry is lyrically driven and psychically intense; I’d liken its energy to an ambulance trying to get through a traffic jam. There were sirens outside my windows every day when I lived in New York.  Now I live on a country road, and it’s coyotes at night.  This has required me to reconsider they very tropes I once relied upon. It’s required me to rethink how I approach writing poems. While it hasn’t been easy, it’s these types of challenges that make one a better writer. 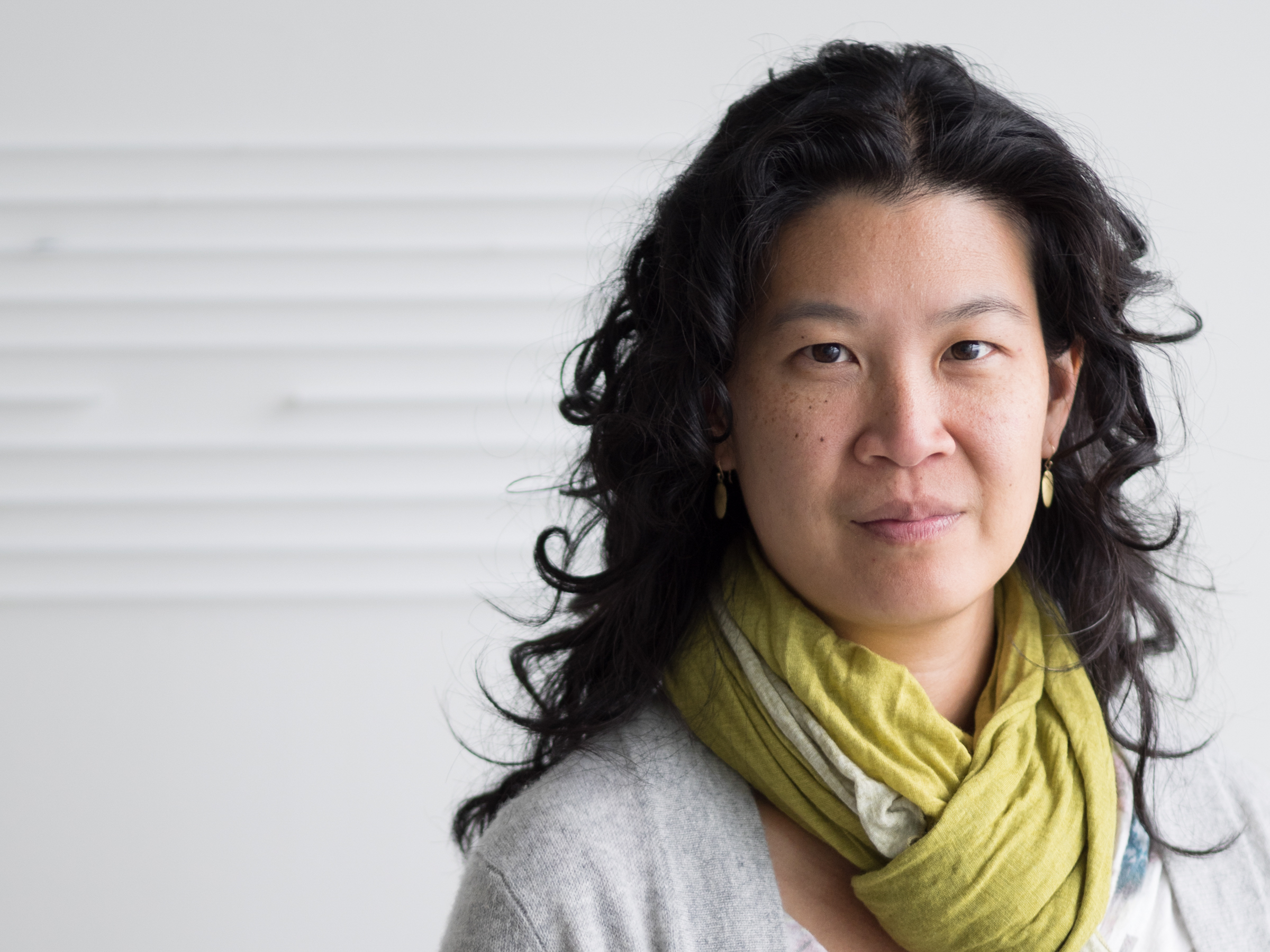 Elaine K. Ng is a Rockland-based artist whose work explores the physical and psychological structures of site. Her multi-disciplinary practice uses material investigation, writing, and research to examine our collective knowledge of place. It manifests as installations and sculptural objects that are often poetic in sensibility and play off the architecture of a space. Her most recent work has been focused on the patterns and materials that help us to define place and our relationship to it. Born in Dallas, Texas to immigrants, Elaine first trained as a classical pianist and then studied pre-veterinary medicine and ceramic sculpture at the University of California, Davis. She went on to obtain an MBA and an MA in arts administration from Southern Methodist University and worked in nonprofit management for 10 years. In 2010, she returned to the studio to focus full-time on her own artwork and completed her MFA from Cranbrook Academy of Art in 2014. She exhibits her work internationally, has been a Visiting Professor at NSCAD University and a Visiting Artist at Tainan National University of the Arts, and has lectured at the China Academy of Art in Hangzhou, China. She is a 2019 Artist in Residence at the Djerassi Resident Artist Program and a 2019-20 Research Fellow with the Winterthur Museum, Garden & Library. In 2017-18, Elaine was awarded a U.S. Fulbright Fellowship for research in Taiwan. 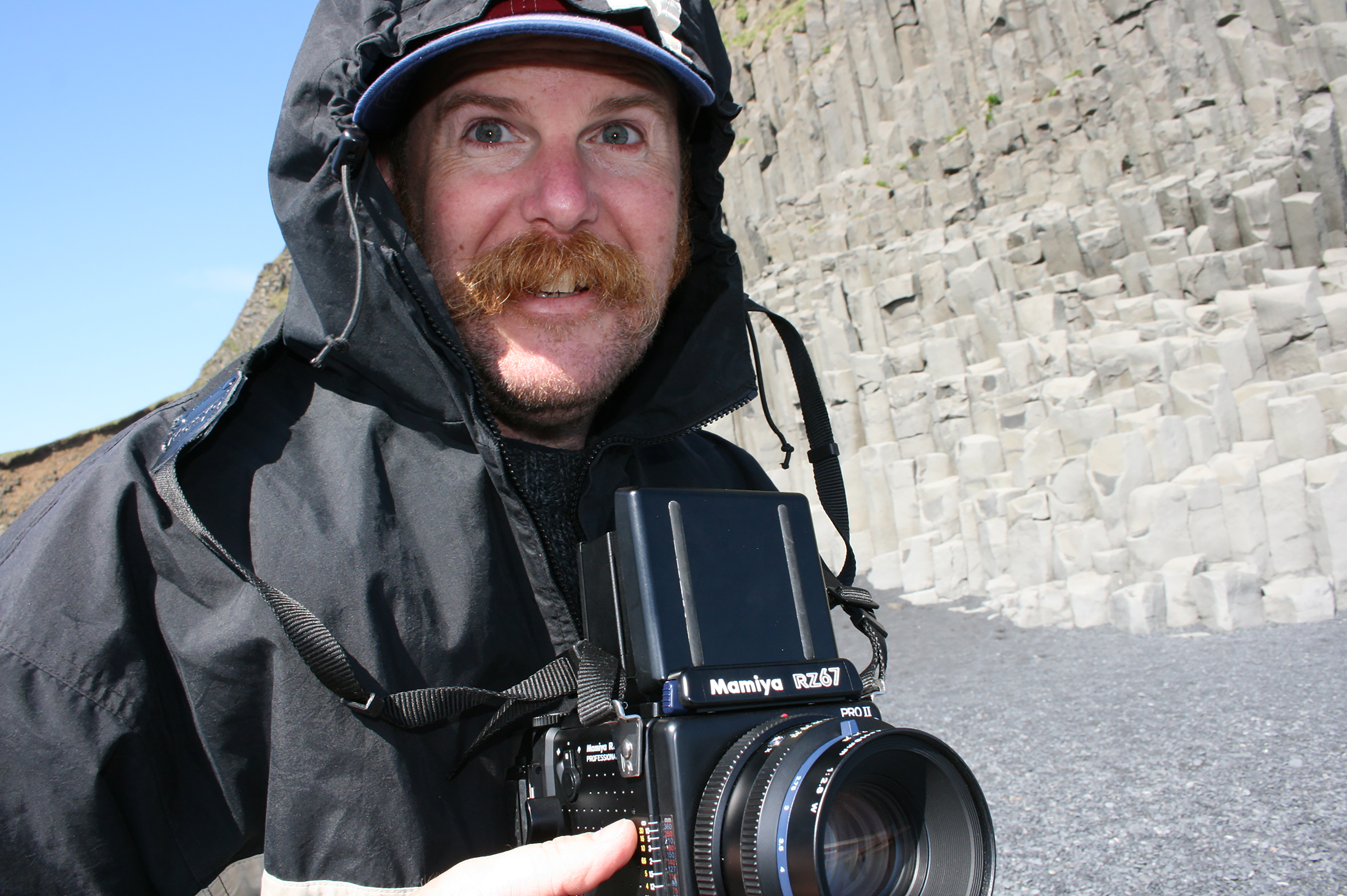 Joshua Reiman is an artist working in sculpture, film, video and photography. Reiman’s work deals with themes of exploration, identity, nature, and contextual inquiry. His short film works offer an array of lush landscapes with characters that guide audiences through layered conceptual ideas about art, history, popular culture, and topophilia. His sculptural work has ranged from vitrine-based works, to kinetics, to iron castings, and installation - always using humor to start serious conversations. He seeks to execute thoughtful physical objects and cinematic experiences that instigate phenomenological reflective moments for his audience. Reiman’s work has been exhibited in galleries and museums across the United States, across Europe, in Australia, and Africa. Joshua has an MFA in sculpture from Syracuse University and a BFA in sculpture from the Kansas City Art Institute. Reiman is also a contributing writer for Sculpture magazine.Reiman is currently an Associate Professor of the MFA in studio art + sculpture at the Maine College of Art, where he is also the chair for the sculpture department. Reiman’s connection to Maine goes back to the early 1990’s when he worked on a farm in Athens, raked blueberries in the Rockport Hills, and had many adventures around Unity. He made a film on Prout’s Neck inspired by the life of Winslow Homer between 2012-15, and has lived in Maine for the past four years.