The Maine Arts Commission’s Fellowships reward artistic excellence, advance the careers of Maine artists and promote public awareness regarding the eminence of the creative sector in Maine. The awards are made solely on the basis of artistic excellence. Due to the competitiveness of the Individual Artist Fellowship program and to avoid conflict of interest, all jurors selected for this program reside out of state. The seven fellows for 2021 are: 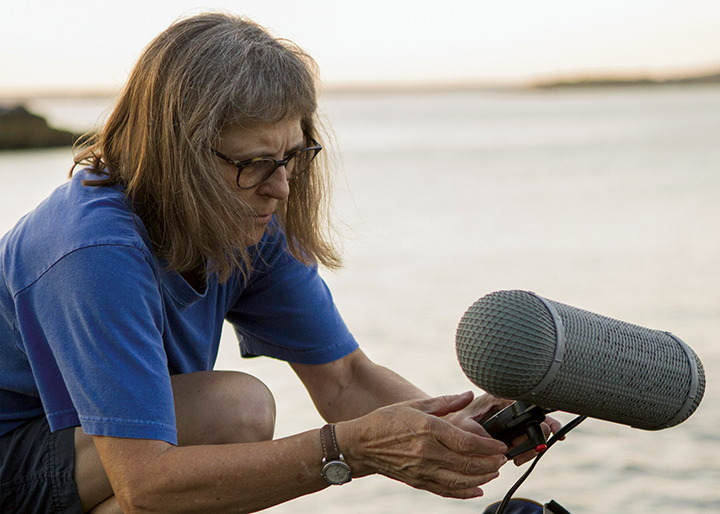 Dianne is a sound artist who has been living in Maine for over thirty-five years. Her love of the elusiveness of sound is what opened her ears to the medium. During semester breaks in college she volunteered in Appalachia, listening to the rich story-telling tradition from the hills and hollows. From an artist residency in Shenandoah National Park, to teaching audio production at the University of Maine in Augusta, to creating field recordings from Northern Iceland and the Arctic Circle, Dianne’s extensive sound portfolio has been heard in exhibitions, museums, theatre festivals, radio broadcasts, and installations the world over. With the Maine Artist Fellowship award happening during the Covid-19 pandemic, Dianne will focus on exploring the world of sound from her own backyard. From York to Lubec, Dianne plans to work on her coastal harbor series exploring the small harbors up and down the peninsulas and the islands along the Maine coast. To see Dianne's full profile CLICK HERE. 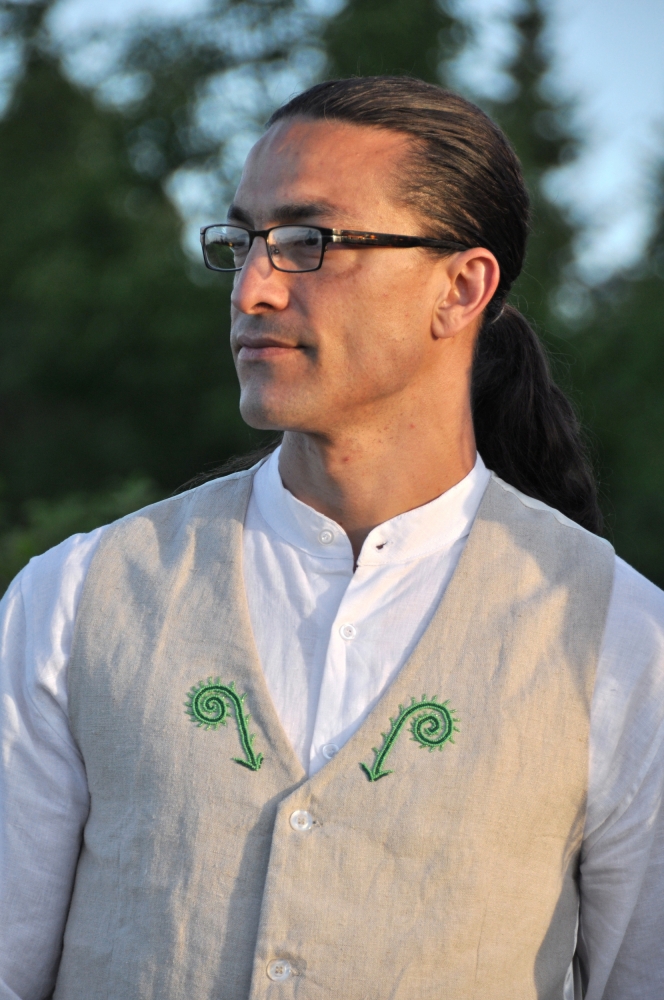 Gabriel Frey is a Passamaquoddy basket maker from Sipayik. Weaving baskets for about twenty years, Gabriel sees the art form as an expression of his natural worldview, and a large part of his cultural identity.  As a citizen of the Passamaquoddy tribe and a member of the Wabanaki confederacy, Gabriel learned about the traditional art form from his grandfather, his first significant teacher. Passed down from generations of Passamaquoddy basket makers before him, Gabriel says the baskets are a connection to his past, present, and future, interwoven to create functional pieces of art. Using the brown ash trees from the woods, each piece has an element of carving.  He carves the hoops, rims, handle, and wooden pins to fasten leather straps. The majority of Gabriel’s tools such as basket molds, gauges, and the shave horse are adaptations of traditional designs. As he carves his creative path in the basket making community, Gabriel says he works toward perfecting the function and form of the traditional baskets while evolving each basket to reflect his personal style. 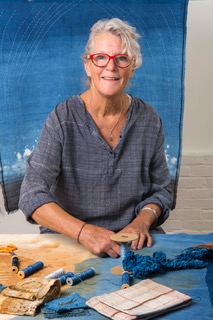 Sarah Haskell is trained as a fine textile maker, but she admits her work has always been more poetic then practical by finding beauty in the imperfection of hand dyed and woven linen. Thread by thread, Sarah says she seeks “to make visible the known and unknown, the concrete and the mysterious.” Guided by the Buddhist concept of impermanence, Sarah says the core of her work explores the parallels between the impermanence of organic textile materials and our human bodies. She subjects her handwoven linens to rust dyeing, weathering, bleach and compost dyeing.  The transformative dye processes allow her to be a witness in the process of metamorphosis – and challenge her attachment to what she once deemed precious. After the handwoven linen has been weathered and dyed, Sarah embellishes it with hand stitching to add details to the imagery and story. By being awarded the Maine Arts Fellowship, Sarah plans to upgrade her dye lab, and hopes that with the award comes more visibility and a wider audience for her work.

Jocelyn Lee has made portraits of women and girls for over 35 years. She uses the camera to explore psychological and physical states of being like puberty, pregnancy, sexuality, aging, illness and death. Her photographs emphasize the tactile and sensual nature of the world and our place, as embodied beings, within its material continuum. As Jocelyn ages, she is increasingly passionate about making portraits of women and girls that do not fit traditional stereotypes of beauty. In a culture that is obsessed with vanity and a narrow vision of what is beautiful, she says she is committed to making portraits of women living in real bodies. Through her work, Jocelyn hopes to create a radical empathy for all that encourages the deeper realization that physical beings are at their core sensual: aging is not antithetical to sexuality, and physical disability, surgery, age or fuller figures should never be equated with ugliness or undesirability. Her current book Sovereign is a focused expression of this work, and features women over 55 naked in the landscape and at home. It will be released by Minor Matter Books in November of 2020.

Living in Maine has been transformative for Alex’s work. There is such natural beauty here. The expansiveness of the sky, and the openness of many of the conversations   here, has opened up an expansiveness in ideas to explore. Alex’s next book, BOTH AND NEITHER, is a gender-and-genre-bending work of memoir, history, cultural analysis, trans re-imaginings, and an international road trip about life beyond the binary. Alex is honored to receive this support from the Arts Commission, and from their new home state, as they work to make a book that speaks both to our past and our future. 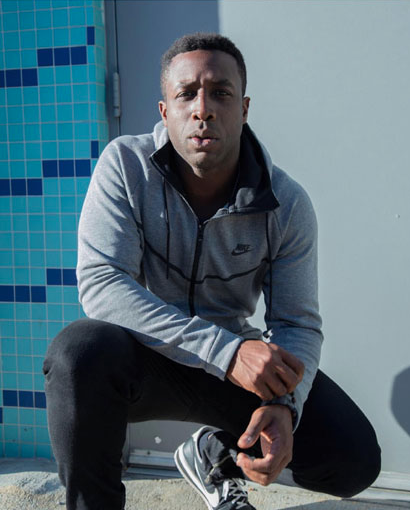 Michael Odokara-Okigbo, better known as Michael O. is a singer, songwriter, performer and producer who harnesses his personal and cultural influences to create a powerful sound. Through music, he aims to build connections that break down ethnic, geographic, and cultural boundaries through his exploration of himself, his heritage, and of the world around him. Michael says it is a huge honor to be named a Maine Artist Fellowship recipient. More than the financial incentive, Michael says this award validated his mission to the arts and reassures himself that he is moving in the right direction. He plans to use the award to elevate his work, and hopefully, he says that elevation can help inspire Mainers in this new world we live in. 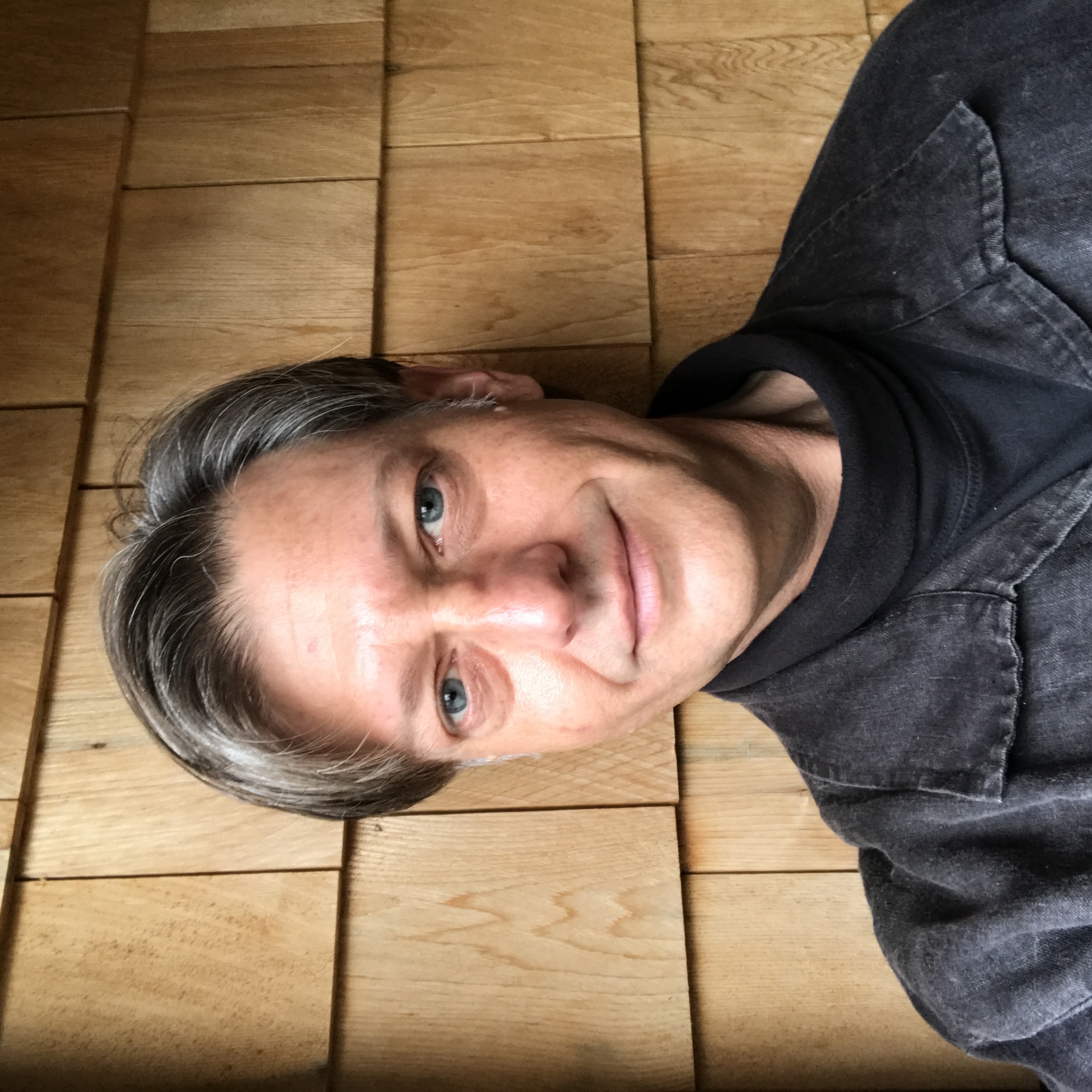 Tim Whitten identifies his area of work as marlinespike craft, which encompasses a broad range of weaving, braiding, knotting and sewing skills. The pieces that he makes are practical in function but sculptural in form. The range and scale of elemental geometries drew Tim to this type of work - from the simple spiral twist of a piece of rope to the complex, multidimensional patterns in a bell lanyard or chest handle. Tim was born in Connecticut to parents who left Maine for careers in education, but as a youth returned year after year for nearly entire summers of primitive tent camping in Washington County. From his formative experiences as a youth, Tim had always regarded Maine and the Downeast region, in particular, as a magical and inspirational place. Having no connection to the maritimes in a seafaring sense, Tim became growingly cognizant that the Maine coast was where his roots were and where he wanted to call home. Hancock County became the destination of focus. He moved to Deer Isle in 2008 with his wife and subsequently opened a shop and studio gallery. He continues to work and show his items at the Marlinespike Chandlery in Stonington. Tim says he is tremendously pleased to have been selected for the Belvedere Craft Fellowship and that he has been able to elevate the craft to a level worthy of recognition. Visit Tim’s website at http://www.marlinespike.com/